How To Reduce Synthetic Fertilizer Use

As more farmers and ranchers transition away from synthetic fertilizer use, NCAT’s ATTRA Sustainable Agriculture program has a library of trusted and practical resources to increase self-reliance and limit or eliminate the use of synthetics.

Data show consumer demand for certified organic and regeneratively produced foods continues to increase. The sale of organic products in the U.S. has grown more than 30 percent, and the number of organic producers is up almost 40 percent since 2016.

Transitioning to a production method that is not reliant on synthetic fertilizers can be accomplished strategically over three to five years. The following publications, tipsheets, and videos are a good place to start learning how things like cover crops, green manures, and alternative soil amendments can result in reduced input costs and increased self-reliance.

Ratcheting Down Commercial Nitrogen While Retaining Grass Production
In her informative article, Nitrogen: The Double-Edged Sword, Dr. Christine Jones (2014) outlines a path to reducing commercial nitrogen in pastures over a five-year period. She recommends a 20% reduction in the first year, followed by two years of additional 30% reduction, culminating with two years of minimal applications of 5 kg N/hectare (4.5 pounds per acre). At Montana Highland Lamb, the Scott family has roughly followed her advice for more than four years, and so far, it has proved successful. There has been no detectable drop in grass production, and in 2017 they did not apply any N fertilizer. The soil organic matter level is 5.5%. (Source: Nutrient Cycling in Pastures)

Featured Resources for Reducing Fertilizer Use

First, the basics…. If you have healthy soil, nitrogen becomes plant-available through the predation and excretion of plant-available nitrogen by soil organisms. But if the soil you are starting with is poor, and you are looking to increase nitrogen levels to help boost productivity, what is the best way to do this? Instead of using commercial nitrogen fertilizer, there is a renewable source of nitrogen that farmers have utilized for millennia: biological nitrogen fixation. Biological nitrogen fixation is done primarily by bacteria in association with legume plants, but also by certain soil bacteria such as actinobacteria and cyanobacteria. Establishing or maintaining legumes in the pasture while providing good habitat for free-living, nitrogen-fixing bacteria is a cost-effective, long-term way to ensure pastures have sufficient nitrogen and provides approximately 65% of the nitrogen used by crops and pastures globally and can be maximized by maintaining diverse plants and robust agricultural soils.

There are three basic practices to reduce synthetic fertilizer use to consider: perennial pasture and crops, cover crops in rotation for annual crops, and good grazing management for livestock producers. These practices build soil carbon, which is the key to fostering soil health and plant fertility. Christine Jones (2014) points out that there are four principles on which farmers can base their practices to enhance the liquid carbon pathway:

HOW TO COVER CROP 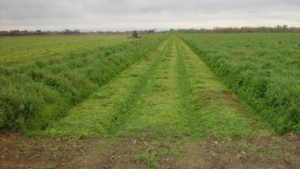 Given the increase in commercial fertilizer prices, converting free sunlight to nitrogen is becoming increasingly attractive. In a Florida study, maximum cotton yields were achieved with a 57% reduction in nitrogen fertilizer following a white lupine cover crop (Sustainable Cotton Production for the Humid South).

In organic farming systems, the use of synthetic chemical fertilizers and pesticides are generally not allowed. Farmers and ranchers have been maintaining fertility and increasing soil function using regenerative methods such as cover cropping for decades while maintaining crop and livestock productivity. Planting multiple cover-crop species promotes resiliency, provides high-quality residue, and their carbon to nitrogen ratio can be targeted to satisfy cover cropping objectives. They may also provide better cover, weed suppression, and biomass, especially during drought or other non-optimum conditions, and may be to avoid buildup of plant pathogens or parasitic nematode populations in the soil.

HOW TO ADAPTIVELY GRAZE

A well-planned and managed pasture-based operation can maintain health and productivity of animals and plants, build pasture soil health, provide nutrient cycling and soil fertility for subsequent crops, reduce input costs, and achieve a positive economic return. Adaptive grazing can build soil and pasture-stand health. But to take advantage of these beneficial qualities, a grazier should pay careful attention to pasture rest, recovery, and grass stubble height after grazing. A grazier should be aware of the direct correlation between after-grazing stubble height and pasture health. Grazing is part art, part science, and you should be flexible in moving livestock based on the goals you want to achieve as well as the amount of grass stubble, or residual, that is left behind.

HOW TO USE ALTERNATIVE AMENDMENTS

The sustainability of a farm system is only marginally related to fertilizer use. Intrinsic soil factors such as slope, texture, and local rainfall, along with soil management practices that build healthy soil such as a forage-based rotations, cover crops, and minimizing tillage have a greater influence on the sustainability of any given farm than does the type or amount of soil amendments used. Merely shifting from conventional inputs to alternative ones does little to increase overall sustainability. In most cases, alternative products are appropriate and effective as minor components of a highly developed system of soil management. They are most effective in fine-tuning a system where the soil is already functioning relatively well.

Read more and learn about the types and kinds of alternatives at Alternative Soil Amendments.

HOW TO USE ANIMAL MANURE 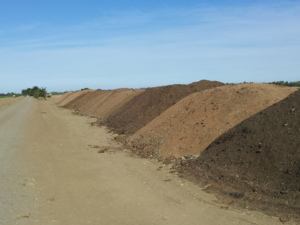 Manure is most effectively used in combination with other sustainable practices, such as crop rotation, cover cropping, and green manuring, and can add important plant nutrients such as nitrogen, potassium, and phosphorus to the soil and improve soil quality. The timing of manure application is very important to ensure that the manure benefits the plants and soil. Manure, if applied and managed correctly, can be a great means of enhancing soil and crop quality.

Read more about manure use, composting, and application rates in Manure in Organic Production Systems.

Digging Deeper into the Science of Soil Fertility and Nutrient Cycling 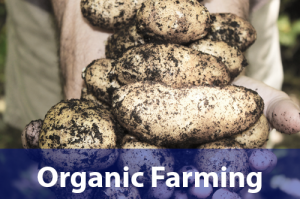 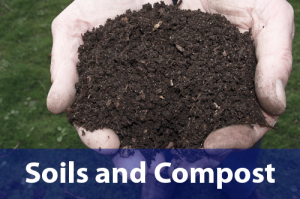 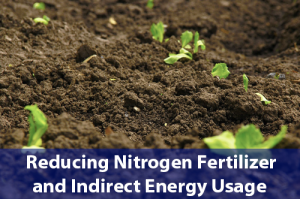 If you have questions about implementing these practices on your farm, contact Lee Rinehart or Nina Prater for assistance.