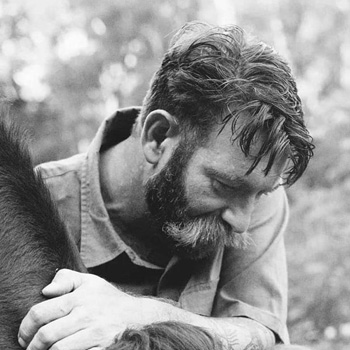 Specific Areas of Expertise:
Crop and livestock rotation, regenerative practices, silvopasture, cooperatives
Farming is in Mike Lewis’ DNA. Born in the aptly named town of Farmington, Maine, Mike follows in his great grandfather’s footsteps as the first family member in two generations to continue the farming legacy. Raised throughout Maine, green farms and rolling acres accented Lewis’s childhood and cemented in him a love for the natural process of agriculture.

After serving in the Military, Mike landed in Kentucky and realized that it was farming that was calling to him. In 2009, he took an internship on an organic farm in Gravel Switch, Kentucky and founded Growing Warriors — the first Veteran-oriented food security project with a mission to equip, asset, and train military veterans in production agriculture to feed themselves, their families, and their communities. To date, the organization has provided education and training resources to hundreds of veterans and their families.

In 2014, Mike began farming hemp as part of the Kentucky Pilot Program. With the support of Fibershed and Patagonia, he became the first federally permitted hemp farmer in the U.S. since Prohibition. He has won numerous awards for his work in agriculture and farming, including the 2013 and 2014 Local Food Hero award, the 2015 Wendell Berry New Agrarian Kentucky Colonel award, the 2014 Yahoo People That Made the World a Better Place award, and the GRIST 50 award.

Today, Lewis is a regularly sought-after speaker who educates audiences on agrarianism, regenerative agriculture, farm safety, veterans in agriculture, and local economics. He has been recognized as a Farm Aid hero for his work with Veterans and sustainable agriculture.
Mike currently resides in Kentucky with his wife, daughter, and son. When he is not on the farm or working the fields, he enjoys reading and debating the relationships between religion and ecology.

Return to the Staff Page