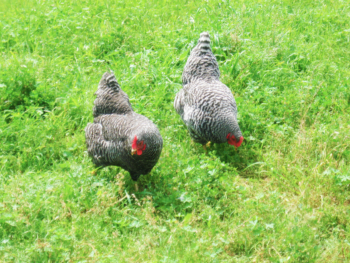 What Is Biosecurity and Why Is It Important?

Biosecurity is the implementation of plans and practices that will reduce chances for a flock to come in contact with disease-causing agents. These practices include tactics such as reducing contact with visitors, wild animals, and other poultry flocks, as well as vaccinations and sanitation of equipment. By implementing simple biosecurity measures on their farms, producers can reduce the risk of disease outbreaks dramatically.

Poultry flocks that contract a disease are difficult to heal and will often be less productive over their lifespan. By implementing biosecurity measures as a part of standard farm operations, the risk of contact with pathogens is reduced. Prevention is always easier and more cost-effective than having to treat a flock after it has become sick, and many poultry diseases cannot be treated effectively. Serious diseases such as avian influenza can rapidly spread throughout a flock.

Promoting Health in the Brooder

Starting with healthy chicks is critical to keeping a flock strong and healthy over their lifespan. Chicks should be sourced from breeders who participate in the National Poultry Improvement Plan (NPIP). Breeders participating in this program are monitored and verified not to have diseases, such as Exotic Newcastle or Pullorum-Typhoid, present in their breeding flocks.

When managing multiple flocks of different ages, work first with younger poultry before moving to older flocks. Work with quarantined poultry last. Flocks of different species should be kept separate from one another to minimize the spread of disease between them. For example, without showing any symptoms, chickens can carry the protozoan disease blackhead that can be devastating to turkey flocks.

Changing environmental conditions determine how flocks should be rotated around a pasture. Move flocks before they run out of forage or are left with bare ground. Additionally, standing water can harbor pathogens, so flocks should be moved away from areas that are flooded or where water has pooled. Rest pastures until forages have started to regrow, or at least three weeks between flocks, whichever is longer.

In addition to a well-developed immune system, the following factors will help diminish the chances for poultry to contract a disease:

Wildlife, such as wild birds, migratory waterfowl, rodents, and insects, can carry diseases that can be transferred through contact with poultry flocks. Reducing contact with wildlife as much as possible will help decrease the chance for direct transmission.

Wildlife seek access to feed, water, foraging areas, and wetland habitat. Feed will attract pests such as rodents and insects. To prevent wastage and maintain quality, feed should be stored in bins or barrels that have no holes and cannot be chewed through. Therefore, feeders and waterers should be managed to minimize access and feed spillage. To prevent feed spills, raise the lip of the feeder to be even with the birds’ backs, adjusting this as the birds grow. There are feeders, such as treadle feeders, that will only open to provide access to feed when poultry stand on a platform or lever. These help discourage wild birds and rodents from feeding on rations provided to pastured flocks.

In order to minimize contact between pastured poultry flocks and migratory waterfowl, try to avoid raising poultry adjacent to bodies of water that are key habitat for waterfowl.

Diseases can be transmitted by inanimate objects, commonly referred to as “fomites.” The most common fomite for transmitting disease on a farm is footwear. For this reason, farmers should dedicate a pair of boots or shoes to be used only for chores on the farm.

Poultry producers need to request that any visitors to the farm wear clothing and shoes that have not been worn around other poultry, wear protective booties, or pass through a sanitizing footbath. Perimeter fencing and warning signs can help keep people from inadvertently coming onto the farm. Farm stands or stores should be located away from poultry flocks. Birds should never be allowed access to areas where visitors park their cars, as the tires may act as fomites. Customers can be allowed to see poultry without actually contacting them or their pasture areas. Farm tours are a great way to share information between farmers, as long as biosecurity measures are in place to prevent transmission of diseases from visitors’ contact with the flocks. As a general principle, visit the younger birds first and then move on to older flocks to minimize risks of contamination. Older flocks may have built up resistance that is still developing in the young chicks or poults.

Footbaths are an effective way to sanitize footwear as people move across the farm. They can be made on-farm using a shallow pan or bin, a doormat, and a long-handled brush. Specific detergents are available for sanitizing without damaging footwear. Footbaths should be placed in doorways or gated entrances to pastures, where personnel will have to step through on their way to the flock.

What to Do If the Flock Gets Sick

Despite proper planning and preventive health practices, poultry sometimes get sick. Remedies for disease are most effective when initiated promptly. Birds may show early symptoms such as, but not limited to, depression, nasal discharge, lack of appetite, and drop in production. When birds in a flock start to show symptoms, it’s vital to remove them from the flock and put them into quarantine. A quarantine area should be clean and well-ventilated and provide access to fresh feed and water. Birds should stay in quarantine away from the flock for 30 days, then be reevaluated for symptoms. While birds are quarantined, they should be the last stop while doing chores. Use a footbath or separate pair of boots or shoes when entering the area.

Veterinarians who specialize in poultry are hard to find in the United States. However, every state’s land-grant university system has a veterinary diagnostic laboratory. In most cases, these laboratories will accept mortalities, blood, or tissue samples. They can run tests to determine the cause of illness or death. Diagnosis is especially useful when determining the source of disease in a flock and coming up with an appropriate response. Farmers should contact their state’s laboratory to discuss the cost of this service and get instructions on how to collect and package a sample so that it can be accurately tested.

Biosecurity for Birds
USDA-Animal and Plant Health Inspection Service
Information from the USDA on preventing and identifying diseases. 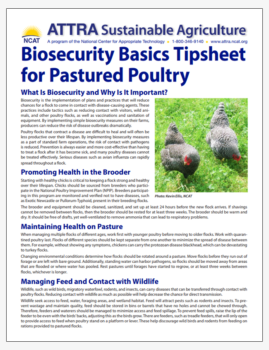