The Barber Pole Worm has threatened sheep production in the eastern United States and has the potential to impact Intermountain West production as well. In fact, it already has.

Ultimately, combatting the Barber Pole Worm on irrigated pastures with dewormers alone is a losing battle. You will not win because there are only three classes of sheep dewormers and trillions of parasites. The clincher? Time is on their side.

Dewormers have a definite place in a parasite-control program, but how much better would things be if we could drastically reduce the need to use them? Not only will we be saving dewormer, money, and time, we will be improving the soil environment for microbes and arthropods, of which the dung beetle is the most evident. All of these little creatures of the soil do our work for us, improving organic matter, cycling nutrients (see the ATRRA publication Nutrient Cycling in Pastures) and saving moisture in the soil. That translates into more grass, healthier animals, noticeably less costs, and more profits. But to realize those benefits, we need a plan.

There are two long-term, holistic approaches to reining in the Barber Pole Worm: grazing management and genetic selection. Perhaps the one with the most immediate returns is strategic grazing. We know that the environment plays a huge role (usually 80%) in how a gene is expressed in an animal. For instance, a particular sheep’s ability to withstand parasites depends upon her genetic make-up and the environment in which she grazes. If we can create a grazing environment that has fewer Barber Pole Worm larvae to ingest, we and our sheep are miles ahead. Here is the plan.

It has only three rules: 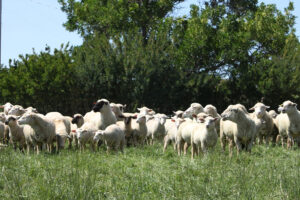 Tactical Position: Leave Behind Six to Eight Inches of Grass

Ingestion: Leave Before the Larvae Arrive 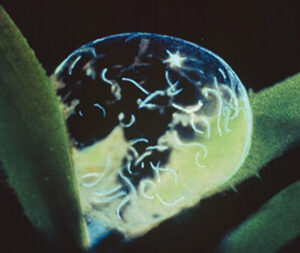 L3 Infective larvae waiting for your sheep to ingest them. You can avoid them by exiting paddocks before L3 larvae get to their perch (four to nine days). Photo: Langston University Research and Extension

It takes four to nine days after deposition for eggs in the fecal pellet to hatch into L3 larvae and then to crawl up on to their perch in the grass leaf.

If you move animals from the paddock before four days, you miss the latest crop of L3 larvae. Simple as that.

One- to four-day paddock periods also give your irrigated (or rain-fed) grass production a huge boost. Try it and be amazed. Who doesn’t want more carrying capacity?

Graze to Control: The Sum is Greater than the Parts 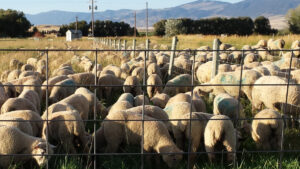 Fence-line weaning begun with ewes on the right and lambs on the left. Note that all heads are down, grazing. After 48 hours, the lambs were gently moved away. Not one bleat and little stress. Photo: Dave Scott, NCAT

Changing the way you graze can be one of the best moves you make to confront the Barber Pole Worm. To top it all off, there is little the worm can do genetically in your lifetime to adapt to it. You win.

This publication is produced by the National Center for Appropriate Technology through the ATTRA Sustainable Agriculture program, under a cooperative agreement with USDA Rural Development. This publication was also made possible in part by funding from the National Institute of Food and Agriculture, U.S. Department of Agriculture, under award number 2016-38640-25383 through the Western Sustainable Agriculture Research and Education program under subaward number EW 17-011. ATTRA.NCAT.ORG. 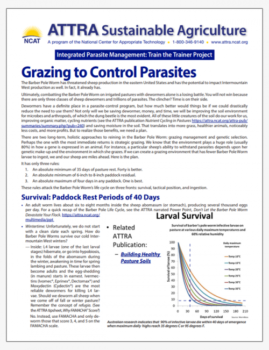