There are several key diseases that affect peach production. Use this handy guide to help identify diseases and to learn more about causes and solutions. For more specific information about these diseases, or to learn about peach diseases not addressed here, see ATTRA’s Peach: Organic and Low-Spray Production publication. 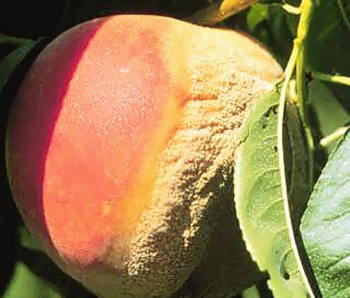 Two to three weeks before harvest Monilinia fructicola infects the fruits as they soften and ripen, causing rot both at harvest and in storage—some of the infected fruit may not display symptoms until after harvest.

Often occurs in warm, humid climates. It is more prevalent in the eastern United States than in the west.

Blossom blight during bloom is an indicator for extensive brown rot later in the season. 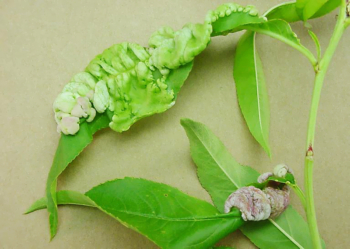 Infected leaves become misshapen, deformed, and necrotic, resulting in a premature loss of leaves with a subsequent re-sprouting of new leaves.

Infection period is when new leaves start emerging from buds in the spring. 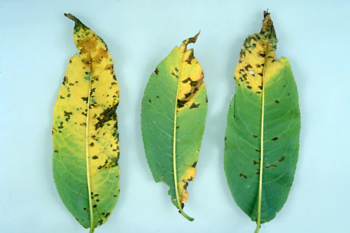 Affected tissue eventually falls out of the leaf, leaving a shotgun-hole appearance. 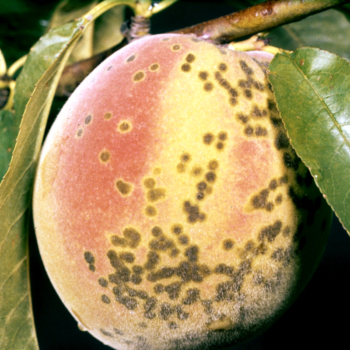 As the fruit matures, the spots enlarge and turn brown, possibly causing the fruit skin to crack. 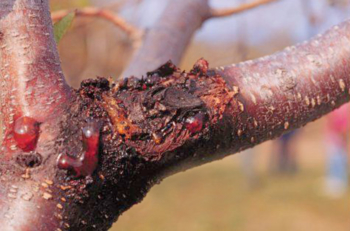 The fungi that incites this disease invade sites where damage has occurred due to mechanical injury, cold, poor pruning techniques, improper pruning time, and borers.

First visible symptom is oozing of gummy sap near the wound, beginning when temperatures warm up in the spring.

Can be difficult to diagnose, but one telltale symptom is cankers that have an elongated or elliptical shape.

Bark dries out but usually remains intact the first year.

Organic growers have traditionally relied on sulfur or sulfur-containing fungicides to control brown rot, and nothing better has yet been developed. The first application of sulfur should be done at the “pink” stage, just before the petals open. Applications should be repeated at seven-day intervals, especially if rain occurs, for a total of three applications. Two other applications should also be made—one at petal drop, the other at sepal drop (usually about 10 to 14 days after petal drop). The crop is still susceptible to infection later in the season, but treatments during the early “critical” stage will reduce the amount of crop loss without leaving a sulfur residue at harvest. Augmenting sulfur with Surround™ WP Crop Protectant provides better disease control than sulfur alone.

Harvested fruit is also susceptible to brown rot infection. To prevent infections at harvest and during storage, peaches should be picked and handled with care to avoid punctures and skin abrasions on the fruit. Any damaged fruit should be discarded, since wounds facilitate entry of the fungus. Rapid cooling or hydrocooling to remove field heat prior to refrigeration at 0 to 3° C will also help reduce infection.

Sprays must be applied during the trees’ dormant period—after the leaves have fallen and before the first budswell in the spring. Spraying after the buds have opened is ineffective because infection takes place as the young leaves emerge, and the fungus develops inside the leaf.

Many orchardists spray just prior to budswell during the months of February and March. Orchards with a history of severe peach leaf curl benefit from a double application: in the autumn at leaf fall and again in late winter or early spring just before budswell.

Selecting disease-resistant cultivars is the principal means of controlling bacterial spot. Fortunately for organic growers, copper fungicides—unique in that they also function as bactericides—are allowed for control of bacterial spot. The first spray should be applied before the tree leafs out in the spring; this timing often allows copper-based peach-leaf-curl sprays to double for bacterial-spot treatment. The next period when infection pressure is heavy is petal fall and for three weeks thereafter. Additional spray coverage may be necessary depending on varietal susceptibility and humid weather conditions.

Sulfur and most other fungicides that are applied for brown rot will also control peach scab. There are no resistant cultivars. Pruning to improve air circulation and reduce wetness in the tree can help manage the fungus and prevent twig infection.

Control is limited to cultural techniques. Management begins by choosing planting sites away from older peach and plum trees and eliminating wild or untended plums and peaches near the orchard. Because a cold-damage area is often the primary infection site, painting trunks with white latex paint to reflect the winter sun can be helpful, although this practice is not allowed in organic production. Avoid planting on a south or southwest-facing slope because such a site can induce the trees to warm up too soon in the early spring or late winter, resulting in cold damage if temperatures fall.

Other management techniques likewise center around minimizing damage to the trees, thus denying infection sites to the pathogens. Such techniques include pruning only in the early spring when temperatures have warmed, avoiding leaving pruning stubs, removing dead and diseased branches, and controlling borers. 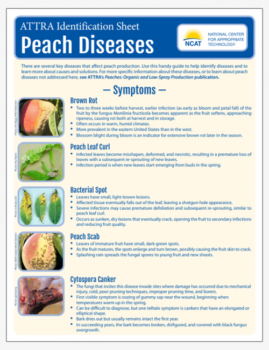