There are several key insects that affect pear production. Use this handy guide to help identify pests and to learn more about solutions. For more specific information about these pests, or to learn about other pear pests and diseases not addressed here, see the ATTRA publication Pears: Organic Production. 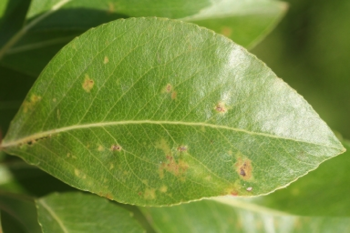 The pear psylla (Cacopsylla pyricola), an aphid-like insect whose only host is the pear, is the crop’s most significant insect pest.

The honeydew left by the psylla damages the fruit by supporting growth of sooty mold and causing a black russeting.

Pear psylla is also an important vector of fire blight and pear decline disease, and can weaken trees in areas of heavy infection. 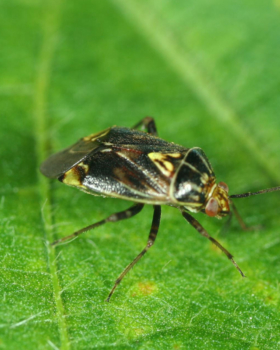 Stink bugs, tarnished plant bug, and other true bugs (insects in the order Hemiptera) will readily feed on pears throughout the growing season.

Early feeding damage may result in a pucker or dimple in the fruit.

Mid- and late-season feeding often results in the development of so-called “stone cells” immediately beneath the feeding site. 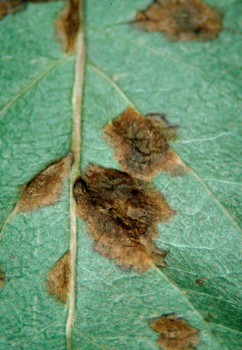 Both species will likely be more troublesome in dusty conditions, as the dust interferes with their natural predators.

Another pest that contributes to poor yields and smaller fruit is the spider mite.

Pears that are drought-stressed will be more susceptible to mite damage. 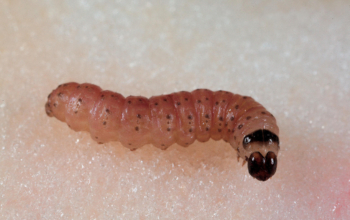 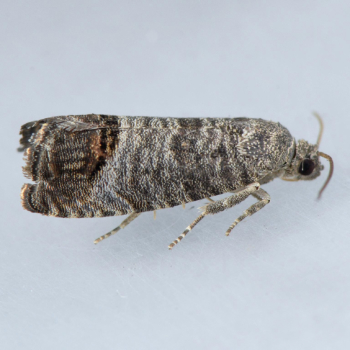 The codling moth, Cydia pomonella, is a small, indistinct gray adult moth that flies mostly at night, so often goes unseen unless trapped.

Presence of “frass” at stem or calyx end of fruit indicates larval feeding inside fruit.

If present and not controlled, can become a key pest, capable of inflicting serious economic loss.

Although the psylla develops resistance to insecticides, it can usually be controlled either with dormant oil sprays or with sulfur sprays (but not a combination of the two, which damages plants.) Insecticidal soap can reduce active populations during the growing season. Surround™  kaolin-clay-based insect repellant is effective against pear psylla. The psylla also has a number of natural enemies such as predatory flies, minute pirate bugs, and lacewing larvae that can help control psylla below economically damaging levels.

Leguminous trap crops (clovers, vetches, peas, etc.) can reduce true-bug damage. Unmown areas and cover crops can also serve as habitat for predator insects. Surround™ is labeled for suppression of stinkbugs and lygus bugs in pears. Also, some of the botanical insecticides derived from the seeds of the neem tree are effective against true bugs on fruit crops.

Predators—including green lacewings, predatory mites, and various species of ladybird beetles, as well as bigeyed bugs, minute pirate bugs, and predatory thrips—will usually control mite outbreaks if the predators are not disrupted by dust or pesticides. Orchard monitoring can help establish whether adequate numbers of beneficial insects are present. If they are not, horticultural oils sprayed during the dormant season can suppress mite eggs through suffocation. Neither horticultural oils nor other materials approved for organic production provide economic control of damaging populations. Dormant horticultural oils and insecticidal soaps can both help control spider mite outbreaks. Neem-based biological insecticides are also labeled for controlling mites on pears.

Among the most effective nontoxic controls for codling moth is mating disruption using pheromones. By releasing quantities of these pheromones into the orchard, the grower can confuse and disrupt the moth’s mating cycle. An aerosol dispenser, nicknamed the “puffer,” which uses a timer to periodically spray pher­omone into the orchard air, is an effective dis­pensing method. For organic growers it will probably not be fea­sible to achieve adequate suppression using mat­ing disruption alone. Growers in California have significantly improved codling moth control by combining mating disruption with black-light traps. There are several “windows” in the pest’s devel­opment that, if detected, can greatly increase the effectiveness of control measures.  Degree-day monitoring can be used to determine the best timing for spray applications. A granulosis virus, originally identified from codling moth, has been shown to be effective for control of early-stage codling moth larvae. Surround™ kaolin clay-based crop protectant is also an effective organic control option. The trichogramma wasp is increasingly used in U.S. orchards as a biological control organ­ism against codling moth. Sanitation and cultural practices can help reduce codling moth populations. In smaller orchards, codling moth larvae can also be intercepted with a corrugated cardboard wrap as they descend the trunk to pupate. 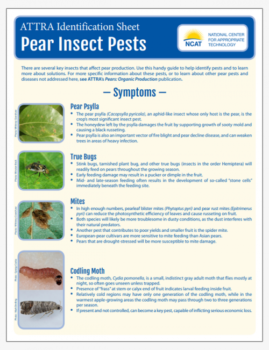