From 2017 to 2021, NCAT’s Subtropical Soil Health Initiative tested velvet bean as a cover crop in the subtropical Rio Grande Valley of South Texas. This tipsheet was developed in part from the findings of those field trials.

Pigeon pea is an upright trifoliate herb.  Some varieties, if allowed, can become a small tree. It is weakly perennial but is most often used as an annual, although it can live three to five years, with the most productive seed bearing occurring in the first two years. In south Texas, many plants can survive over the winter to continue producing into their second year.

There are several wild relatives of pigeon pea on the Indian Sub-Continent, supporting the idea of it being domesticated in that region ~3,500 years ago. Pigeon peas are a well-known food crop eaten throughout the tropical world and are being researched for their antimalarial properties. They have traditionally been used for that purpose in Ghana (Merel et al., 2004; Duker-Eshun et al., 2004).

Pigeon peas are drought tolerant and highly adaptable. They even perform well in nutrient-depleted soils. This crop has been known to produce a harvest even after others have wilted and withered away. Pigeon peas account for about 5% of total world legume production (Odeny, 2007). In South Texas, pigeon peas endure while most of the summer weeds perish from the heat and dry conditions.

As a companion crop, pigeon peas have been shown to increase corn yields by almost 33% in Togolese production systems, which average around 90° high temperatures throughout the year (Sogbedji et al., 2006).

Its upright habit lends pigeon pea to being used as windbreaks in adjacent plots. For instance, in a 1-acre field, the center third of the field can be mowed and incorporated into the soil, while leaving the edges intact. This will allow the outside to act as a windbreak or a sort of nurse crop for the replanted center. Later, the sides can be mowed, incorporated, and then replanted with either a cash crop or more cover crops (Valenzuela, 2011).

In 2019, NCAT took part in a research study that tested pigeon pea’s performance as a cover crop in Texas. This tipsheet was developed in part from those findings.

Pigeon peas are good nitrogen-fixers that supply quite a bit of that nitrate to the subsequent crops through their residue. Most legumes fix nitrogen, but some impart it to other crops better than others. Tree legumes like Leucaena, Calliandra, and Acacia can, in some circumstances, only convert less than 5% of their nitrates into mineralized forms that other plants can use. Pigeon peas, on the other hand, make about 20% of their total nitrogen available to the next crop. These numbers seem to be environmentally dependent, however, because in other circumstances, Leucaena contributed 12% to 28% of its nitrates to subsequent crops (Palm, 1995).

In addition to increasing available nitrogen levels, pigeon pea also is very effective at utilizing phosphorus that would be unavailable to other plants. One way it does this is by forming symbiosis with extant vesicular-arbuscular mycorrhizae better than either cowpea or peanut can (Ahiabor and Hirata, 1994). Pigeon peas also incorporate phosphorous from orthophosphates in the soil very efficiently and can even pull phosphorous from soils with aluminum (Ae et al., 1990). In the world’s Alfisols, iron binds phosphorous, making it unusable to many plants. Pigeon peas are able to exude piscidic acid. Piscidic acid chelates iron, which releases the phosphorus to the plant (Ae et al., 2010). This is very advantageous for pigeon pea because it is able to exclude iron uptake and can grow in soils that would be toxic to other plants.

Pigeon peas affect organic matter in soils in several ways. In the Lower Rio Grande Valley, pigeon peas were observed to form a dense canopy that shaded and cooled the soil. These conditions conserved soil moisture within the pigeon pea plot such that it was still moist days after a rain event, when areas outside the pigeon pea plot were already bone-dry again. Pigeon peas also shed leaves when stressed, thus creating their own leaf-litter mulch. Both of these characteristics are conducive to the accumulation of organic matter.

Pigeon peas need very little soil moisture after establishment and are very well known for their drought tolerance (Odeny, 2007). Our research plot in the Lower Rio Grande Valley was rain-fed in dryland conditions. The crops grew well despite very hot and dry conditions with temperature at or above 100º F for six weeks. Ideally, pigeon peas do well in areas with at least 24 inches of annual rainfall, but we found they performed well in Mission, Texas, which has a mean annual rainfall of 22 inches.

It’s important to protect young pigeon pea seedlings from weeds until they become established. For the first two and a half months the crop canopy is insufficient to provide enough cover to arrest weed growth (Bhengra et al., 2010). However, once the canopy closes, pigeon peas become a very formidable weed suppressor. Pigeon peas suppress weeds in three key ways. In addition to creating deep canopy shade, pigeon peas also shed leaves when stressed. The resulting leaf litter is allelopathic to many weeds, including grasses (Hepperly and Diaz, 1983). Not only is the leaf litter toxic to many grass species, but it also harbors seedling-disease-causing pathogens like Pythium, Fusarium, and Rhizoctonia. It’s important to note that pigeon pea leaf residue is also harmful to some crop species, like other legumes, tomatoes, corn, and Sorghum. However, cucurbit crops grown in rotation with pigeon peas are not harmed (Hepperly et al., 1992). One trend found in Puerto Rico that we didn’t find in Mission, Texas, is a buildup of pigweed within pigeon pea plots. Pig weed was controlled well within our pigeon pea plot in Texas. This may be because it was much drier under south Texas conditions than in Puerto Rico, or it could have been due to differing soil types. Whichever the case, it warrants more investigation. The last way that pigeon peas suppress weeds is by simply outlasting them in drought conditions due to their deep tap roots. We observed that in the depth of the summer heat, many of the weed species withered up, while the pigeon peas endured.

Optimal spacing between rows is 10 to 15 inches, and spacing within the row should be 8 inches (Faroda and Johri, 1981), constituting roughly 45,000 to 70,000 plants per acre. Seed germination is usually low— we observed rates around 50%—so the seeding rate should be increased to 20 pounds per acre or more. From our experience in the Lower Rio Grande Valley, planting depth should be at 1 inch when there is or will be adequate soil moisture to initiate germination. Pigeon peas nodulated readily with the Rhizobia present in the soil and didn’t need inoculation.

This publication is produced by the National Center for Appropriate Technology through the ATTRA Sustainable Agriculture program, under a cooperative agreement with USDA Rural Development. This publication was also made possible in part by funding from Conservation Innovation Grants program at USDA’s Natural Resources Conservation Service, agreement #69-3A75-17-281. ATTRA.NCAT.ORG. 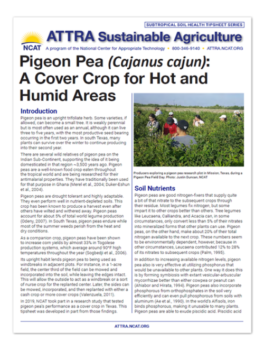