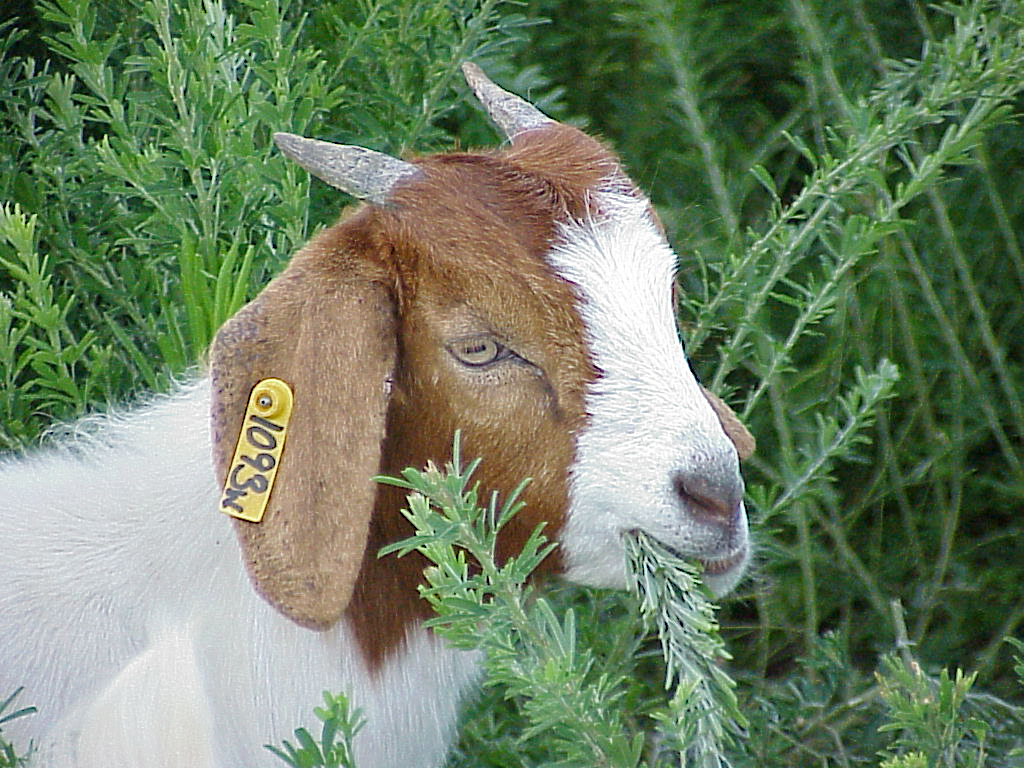 This publication produced by NCAT/ATTRA and the Southern Consortium for Small Ruminant Parasite Control discusses tools that can be used to manage internal parasites of sheep and goats that are becoming resistant to conventional dewormers. One such tool is the forage sericea lespedeza, and the publication discusses how it can be used and presents the results of research on how it reduces parasites in small ruminants.

Control of internal parasites, especially of Haemonchus contortus (barber pole worm, stomach worm), is a primary concern for the majority of sheep and goat producers. These parasites have become more difficult to manage because of increasing resistance to nearly all available dewormers. A severe infection of barber pole worm causes anemia, bottle jaw, and—if not treated—death of infected sheep and goats.

Mature parasites breed inside the host and “lay eggs,” which pass through the host and are shed in the feces. After the eggs pass out of the host, they hatch into larvae. Warm, humid conditions encourage hatching of the eggs and development into infective larvae. The larvae need moisture, such as dew or rain, to break open the fecal pellet and move. They migrate out of the feces and up blades of grass (usually 1 to 3 inches). When an animal (sheep or goat) grazes, it may take in parasite larvae along with the grass blade. Parasite numbers increase over time when conditions are favorable (warm, wet).

Parasites are now developing resistance to anthelmintics (dewormers). Drug resistance is the ability of worms in a population to survive drug (deworming) treatment of the animal at the prescribed dosage. Over-use of dewormers has led to resistance, and many available dewormers are now ineffective.

Condensed tannins and, in particular, the high-CT forage sericea lespedeza are discussed in this paper. An overview of current research on the topic, as well as additional resources and references, are provided. Producers can use this information to keep their animals healthier.

For more information on tannins, see the references listed at the end of this publication and the Further Resources section.

Researchers have shown that big trefoil, sulla, sanfoin, and sericea lespedeza are useful in controlling internal parasite infection in sheep and goats. Providing condensed-tannin-containing forages is one way to boost the health of sheep or goats.

Sericea lespedeza is a high-tannin forage (4-15% DM) that has been scientifically proven to reduce parasite loads in sheep and goats. The mechanism of action is not yet known. Researchers believe that the plant tannins may affect parasites either directly or indirectly (or both). Tannins may react directly with adult worms by attaching to their “skin,” causing them distress, or indirectly by improving protein nutrition of the goat and boosting the immune system. In addition, tannins appear to reduce the hatching of fecal eggs and development of larvae, perhaps by binding to the larvae. (Min et al., 2005) The tannins could also bind with feed nutrients and possibly prevent bacterial growth in the feces (larva feed on bacteria) and so limit the feed available for larval growth, or in some other way inhibit larvae growth and movement. Adult worms residing in animals that are grazing sericea lespedeza shed fewer eggs, and the eggs that are produced have reduced hatching ability. However, when animals are moved off sericea lespedeza pastures and on to other forages, egg counts go back up, indicating that mature worms were inhibited but not killed in the short term. As animals are fed with sericea for longer periods of time, research has shown a reduction in mature worms as well. (Min et al., 2005, Shaik et al., 2006, Lange et al., 2006) Reducing pasture contamination and animal worm burdens will help sheep and goats to be healthier and more productive.

There have been several research trials studying the effects of sericea lespedeza on internal parasites in sheep and goats. The following table summarizes the results. References are included in the last column.

Producers should not rely on sericea as the sole method for controlling internal parasites. However, sericea can be useful as one part of a complete parasite management strategy. Sericea has been shown to reduce hatchability and fecundity (egg laying ability) of internal parasites, and in that way it will help reduce pasture contamination with larvae. Also, when used for longer periods of time, it can reduce the number of adult worms. Researchers are working to determine the most effective and economical ways to use sericea lespedeza as a substitute for anthelmintics, or as a “deworming pasture.” More information will be available as the research is done. Continue to check the Southern Consortium for Small Ruminant Parasite Control Web site for updates.

Managing Internal Parasites in Sheep and Goats
This concise paper includes information gathered from the research of the Southern Consortium for Small Ruminant Parasite Control (see below) and includes helpful information and pictures explaining many of the concepts needed for an integrated parasite control program.

Southern Consortium for Small Ruminant Parasite Contro
The Consortium is a group of researchers and educators who are working on the parasite problem. This site includes publications, upcoming events such as FAMACHA© trainings, contacts for Consortium members, and many other items helpful to producers and educators. This is the place to look for current research results and information about the latest recommendations for sustainable parasite control.

Tannins: Fascinating but Sometimes Dangerous Molecules
An interesting look at the properties and uses of tannins.

USDA Plant Fact Sheet: Chinese lespedeza. 2 p.
From the USDA Plants database. Lots of information, including a map showing distribution, links to other sites, pictures, taxonomy and other specific information.

This publication is produced by the National Center for Appropriate Technology through the ATTRA Sustainable Agriculture program, under a cooperative agreement with USDA Rural Development. This publication was also made possible in part by USDA, CSREES, Integrated Organic Program, and Capacity Building Grants Program, award No. 2005-38814-16429. ATTRA.NCAT.ORG. 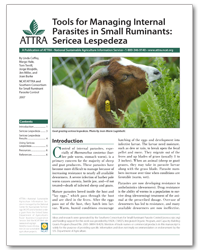