From 2017 to 2021, NCAT’s Subtropical Soil Health Initiative tested velvet bean as a cover crop in the subtropical Rio Grande Valley of South Texas. This tipsheet was developed in part from the findings of those field trials.

Mucuna, also known as velvet bean, is a subtropical legume that produces prodigious amounts of foliage and is most likely native to Southern Asia. There, it is widely consumed, after thorough preparation, and also used in medicinal preparations. Mucuna contains L-Dopa, which is used for Parkinson’s disease therapy. It has also been called an aphrodisiac, used for scorpion stings, and utilized to treat arthritis.  Mucuna has also been used as an anti-diabetic, anti-helminthic, and antibiotic, and it contains antioxidant, anti-viral, anti-carcinogenic, and anti-inflammatory compounds. Although they have medicinal properties, velvet beans are more widely known to cause severe itching (Lampariello et al., 2012). The pods and some parts of the flowers are covered in stinging hairs that are used in itching powder.

Mucuna is perennial but treated as an annual in the southern United States. It is trifoliate and climbing, somewhat resembling kudzu but with much larger seed pods and seeds. In most parts of the world, velvet bean is not invasive, but in South Florida the plant can be a bit aggressive. Although it is not considered a noxious weed, it is essential that the crop be managed appropriately to prevent weediness.

Mucuna is very versatile and can grow in soils ranging in from pH 5 to pH 8, as long as they are well-drained. These large vines require about 40 inches of rain each year. Mucuna is capable of fixing 150 to 270 pounds of nitrogen per acre.

M. pruriens comes in two sub-species and four varieties. The variety of consequence is M. pruriens var. utilis, which does not cause intense itching. Velvet beans were once widely used in the southern United States but were supplanted by soybeans.

In one experiment in Togo, continuously planting corn was shown to reduce available soil nitrate by almost 60%. By incorporating velvet bean into the corn rotation, there was a net gain of 39% over the control. Not only did the velvet bean replace the nitrate that the corn crop removed, but it also added more nitrate than was used, thus precluding the need for additional nitrate inputs (Sogbedji et al., 2006). M. pruriens was also found to increase corn yields more than urea-based fertilizer in some years. Researchers allowed the velvet bean to grow for 20 weeks, then slashed the vines up to use as mulch for the subsequent maize crop. Their work isolated the nitrogen recovered from the subsequent corn crop. It showed that even though more nitrogen was recovered from the urea-treated plot, the Mucuna-mulched plot yielded more, indicating that the increased yield could not be attributed solely to the nitrate content but must have come from other factors that the mulch imparted to the soil (Tian et al., 2000). This reinforces the notion that organic or regenerative agriculture is synergistic, rather than just a collection of its individual components.

In a comparative study comparing kudzu and velvet bean, velvet bean out-performed kudzu when accounting for soil nutrient concentration and biological stability of the soil organic matter, and velvet bean even resulted in a more favorable soil pH. Kudzu, however, resulted in a higher concentration of particulate organic matter (Koutika et al., 2001). By contrast, in our field trials in the Lower Rio Grande Valley, velvet bean was unable to contribute much organic matter because it did not accumulate enough biomass, due to the arid conditions there. Typically, Mission and Lyford, Texas, only receive about 20 to 25 inches of rainfall a year. This is far below the 40 inches needed for velvet beans, which reach maturity at around 120 days. For velvet beans to be successful in improving soil organic matter composition in an area with less precipitation, they would need sufficient irrigation during their 90-day vegetative growth phase.

Velvet beans need at least 40 inches of annual rainfall.  In our Lower Rio Grande accession trials, velvet beans started off very well. However, once soil moisture was at a minimum, during the high heat of the summer, the once-robust vines started to lose stems. Under dryland conditions, their canopy did not shade the soil sufficiently to conserve soil moisture. In contrast, in Sri Lanka, velvet beans were shown to both lower soil bulk density (soil compaction relief) and reduce soil resistance to infiltration. They also improved soil aggregation and increased soil moisture content and capacity when compared to kudzu, which all led to lower soil loss from erosion (Samarappuli et al., 2003). In Kenya, velvet beans were found to have a positive effect on soil moisture content when used as a cover crop in orange groves, which improved orange tree root distribution throughout the soil to a depth of almost 16 inches (Mulinge et al., 2017).

In Benin, research showed that corn intercropped with velvet bean had more biological activity in the soil than monocultured corn, both with and without NPK fertilization. This added soil-microfauna activity led to a reduction in the numbers of obligate phytophagous nematodes like Meloidogyne and Nacobbus, which are pests of many crop species (Blanchart et al., 2006; Caamal-Maldonado et al., 2001). In India, where farmers grow velvet beans during the monsoon season (Oudhia, 2001), the vines can become infested with aphids, but growing them with support can reduce this infestation (Oudhia and Tripathi, 2001). Vine support could be achieved by intercropping velvet beans with sunflowers. In south Texas, we didn’t see pest infestation in velvet beans.

M. bracteata, a close relative of velvet beans with no common name in English, is useful in rubber plantations in India and Malaysia. It could possibly be adapted to use in citrus groves in the Rio Grande Valley or Florida and in papaya fields. In Kenya, nutsedge was reduced by 98% within three growing seasons by using velvet beans as a cover crop. This study also showed that the dense canopy formed by velvet beans while growing still contributes to weed control after it is dead and dry (Saha, 2008). However, when one of our farmer partners grew velvet beans in Lyford, Texas, they just didn’t have the soil moisture necessary for it to have the desired effect on weeds.

Trials in Costa Rica using two different velvet bean species attained nearly the same level of profits as using chemical fertilizers: 93% with M. pruriens and 95% with M. deeringiana. The fertilizers cost more than the seed needed, and the velvet beans resulted in more carbon and nitrogen content in the soil (Molina et al., 2018).  Mucuna seeds are rather large, but then so are the vines they can produce. Seeds should be planted at a density of six to nine seeds per yard, which requires 20 to 40 pounds of seed per acre.

Caamal-Maldonado, J.A., J. J. Jimenez-Osornio, A. Torres-Barragan, and A. L. Anaya. 2001. The use of allelopathic legume cover and mulch species for weed control in cropping systems. Agronomy Journal. Vol. 93. p.27–36.

This publication is produced by the National Center for Appropriate Technology through the ATTRA Sustainable Agriculture program, under a cooperative agreement with USDA Rural Development. This publication was also made possible in part by funding from Conservation Innovation Grants program at USDA’s Natural Resources Conservation Service, agreement #69-3A75-17-281. ATTRA.NCAT.ORG. 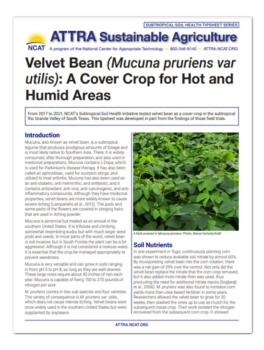