Whiteflies are tiny, white insects that cause crop losses on a global scale. They are members of the suborder Sternorryncha, which includes other pests such as aphids, mealybugs, psyllids, and scale insects. There are almost 1,600 species within the superfamily Aleyrodidae. Most are characteristically white, but there are species in different colors, such as the Citrus blackfly (Aleurocanthus woglumi) which is, as its name suggests, black or slate blue depending upon who’s describing it. Most whiteflies are tiny (less than 3mm), but there are a few “giant” species (4mm or larger). Adult whiteflies are moth-like winged insects and generally colored with white dust. One characteristic that sets the giant whitefly (Aleurodicus dugesii) apart from many other species is that, along with the characteristic honeydew, the nymphs excrete streamers of brittle waxy material.

The metamorphosis of whiteflies differs from that of most other members of this suborder. The general lifecycle of whiteflies begins with an egg being deposited on the underside of a leaf of a host species plant, which hatches in five to 10 days. The egg hatches into a small nymph resembling the mealybug, which begins feeding near its hatch site. These nymphs quickly lose mobility and begin exuding a waxy secretion, making them resemble scale insects to a degree. The adults develop under the scale-like structure and break free of their immobile form and begin feeding and looking for a mate. However, if no male is present, she will lay unfertilized eggs, which all become males, which then can mate with their mother to produce progeny of either sex. Whiteflies are very efficient virus vectors, including begomoviruses, geminiviruses, and mosaics.

Wild feverfew or Santa Maria Feverfew is a noxious weed in many locations. It suppresses some crops with its allelopathic chemicals, but it also suppresses pests like the whitefly. Datta and Saxena (2001) found that both Parthenin and its chemical analogs were effective anti-feedants, nematicides, and pre-emergent herbicides. Ali et al. (2015) found that crude extracts of this common weed are almost as effective as commercial products for whitefly control in cotton. They used 500 ml of dried herb in 5 liters of water with 10ml dish soap to create a 10% solution of the plant material in water. They set the powdered herb in boiling water and let it steep for 24 hours. They further diluted the solution to 5% by adding an additional 5 liters of water to obtain their results in the field trial.

Most sources have suggested that Neem oil is safe, but some sources have suggested it can have deleterious effects under some conditions, like in greenhouses (Abbasi et al., 2003), but did not see those same effects in the field. A 2% Neem oil solution was shown to be effective against whiteflies for seven days in cotton (Khattak et al., 2006). Neem leaves are also effective against whiteflies, causing a 173% yield increase over the control in a field of okra. The crude extract was formulated using 100g of Neem leaves with one liter of water and 10ml mild soap. The powdered leaves were allowed to steep for 24 hours and then strained and applied with a backpack sprayer to all parts of the crop. The increase in yield was linked to the control of whiteflies, which were serving as vectors for Okra Leaf Curl Virus, which can cause 80% yield loss (Asare-Bediako et al., 2014). 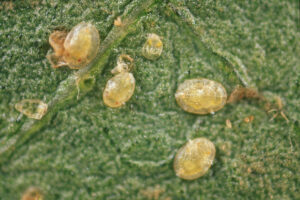 Bemisia nymphs feeding upon the undersides of leaves in a greenhouse setting. Photo: John Goolsby, USDA-ARS

Guinea hen weed is a tropical cousin to the mighty poke sallet plant (Phytolacca americana) that grows across the eastern United States. At present, Petiveria only grows in two of the continental states–Florida and Texas–and it also grows in Puerto Rico and throughout the Islands of Caribbean, where it has a long history of medicinal use (Sathiyabalan et al., 2014). Using an aqueous extract of Petiveria (formulated by boiling 0.3g of powdered leaves in 100ml distilled water for 20 minutes to yield a 3% solution), researchers were able to achieve 100% egg death on habanero pepper plants (Cruz-Estrada et al., 2012). Using an ethanolic extract (created by soaking 50g of powdered leaves in 300ml of alcohol for 48 hours, straining and heating at 40oC until the ethanol evaporated, and then reconstituting with a 1:1 v/v ethanol:water mixture to get desired concentrations of 10mg/ml), the same researchers achieved a 99% ( ±1.05%) death of whitefly eggs. White fly nymphs were treated with the same crude aqueous and alcohol extracts. The ethanolic extract killed 100% of the nymphs, while the aqueous extract only killed 27% (±11.34%) of them.

Soapberries are small trees that grow throughout the southern United States. They range from North Carolina in the east to Colorado and New Mexico in the west and all of the states southward. Indigenous people have long used the plant for soap and as insecticide, some even use it for fish poison. A crude extract from the soapberry (Sapindus saponaria) was found to be effective at killing the glasshouse whitefly (Trialeurodes vaporariorum). This whitefly, as its name suggests, loves to inhabit greenhouses and other protected horticultural environments. It is found all over the temperate regions of the world. In one study, a crude extract was formed by soaking some cut-up fruit (researchers didn’t indicate exactly how much, but a couple handfuls is a good assumption) in water and then straining and drying the liquid. A portion of the residue was then used to make a 400-ppm solution, which killed more than 90% of adult whiteflies (Porras and Lopez-Avila, 2009).

Both Neem and soapberry are particularly strong against the spined soldier bug, Podisus nigrispinus (Poderoso et al., 2016) and thus probably effective against other beneficial stink-bug predators, as well. Use care when integrating botanical pesticides into a gardening regimen due to their possible lethal effects on non-target species. It’s best to use the botanical to knock down a high population infestation, and then release predatory insects to maintain control. 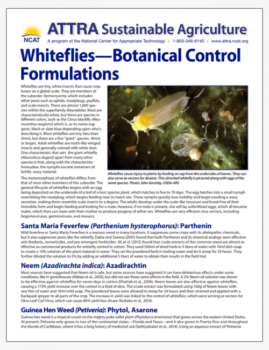