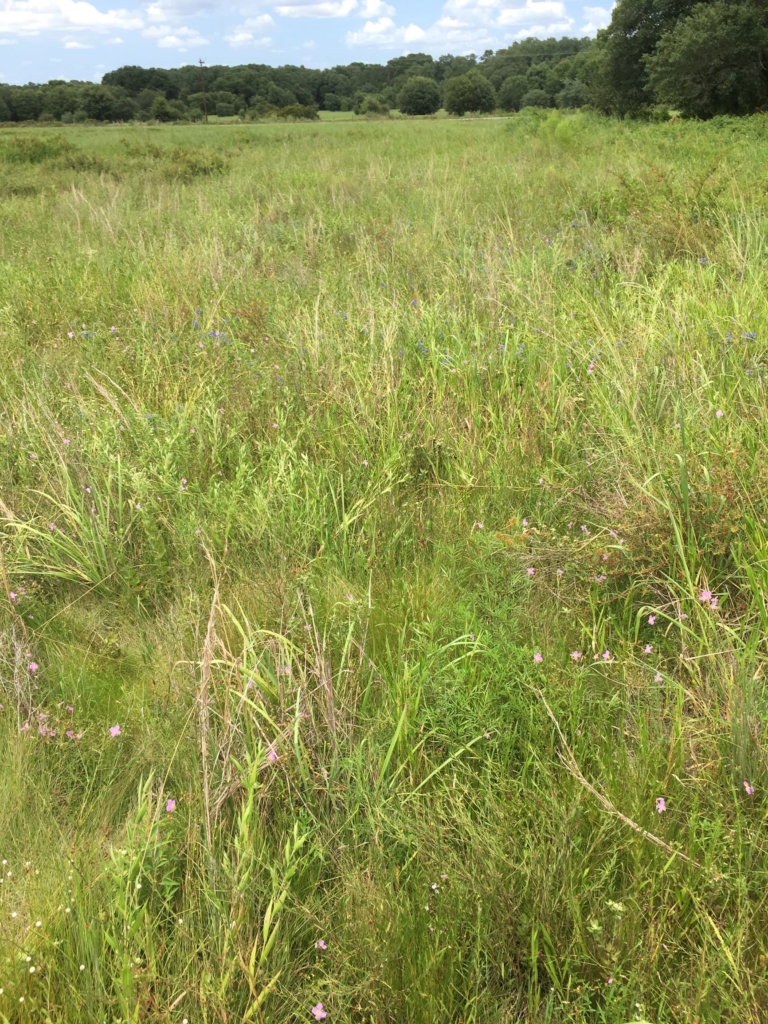 This is an example of a highly diverse pasture in East Texas. Photo: Kara Kroeger, NCAT.

Having found my way to a career in agriculture after 18 years as a nutritionist and herbalist, it is probably not surprising to hear me say that I am fascinated by what people eat and why. Now that I work full-time in agriculture, I have found that I am particularly interested in pasture ecology and function. The funny thing is, these two things are not that different from one another. A healthy pasture has the capacity to fuel its inhabitants with the nutrients they need to thrive — this includes soil microbes, plants, and animals. As humans, many of us many of us seek out healthy foods to thrive, many of which are grown in pastures, such as grass-fed animal meats and game. We have come to find that the healthier the pasture, the healthier the meat.

While many people make conscious decisions about what foods they eat for health reasons, the same considerations are not often made for livestock. We rarely discuss how the variety of plants they eat affects their health, wellness, and nutrient density of their meat.

We know that the vast majority of components in food have some kind of functional biological purpose. What is less known are the functions of many phytochemicals or plant secondary compounds (PSC), which are more abundant in diverse pastures. Given that some food patterns support biological systems better than others, we are learning that PSC play a large role in the healthfulness or adversity of a food’s biological effects and should not be undervalued in the health of livestock.

What role do these untracked chemicals play? As it turns out, a lot. And we are just beginning to understand how PSC mediate ecological action and help plants defend their turf. They also act as medicine when consumed as food by humans and animals. Phenols, terpines, and alkaloids are a few examples of PSC that improve health and the environment. Some of their roles in plants and animals are as follows:

Primary and secondary compounds differ in plants from day to night, day to day, season to season, and place to place. Research is showing that these PSC in various combinations are precisely what improves resilience in plants, animals, and the humans that eat them. An issue with many grazing operations today is that they often consist of monoculture/simple mix pastures, or feed rations that don’t supply a diverse diet to livestock, including an array of PSC.

According to the study Is Grass-fed Meat and Dairy Better for Human and Environmental Health?, by Provenza, Kronberg, and Gregorini, health is enhanced when livestock forage on phytochemical-rich landscapes, and illness often increases when livestock forage on simple mixture, monoculture pastures, or consume high-grain rations in feedlots. Among the many roles they play in health, PSC in herbivore diets protect meat and dairy from protein oxidation and lipid peroxidation that cause low-grade systemic inflammation implicated in heart disease and cancer in humans. For more information on PSC and animal health, refer to the book Nourishment by Dr. Fred Provenza.

By fostering plant biodiversity in pastures, we not only improve beneficial PSC for animal health, but we also encourage a number of other ecological goods and services. Understanding the reasons we want to support healthy rangelands for increased biodiversity is important.

Healthy biodiverse rangelands produce: 1) forage for livestock; 2) habitat for wildlife; 3) plant and animal diversity; 4) hydrologic function for groundwater recharge; 5) carbon sequestration; and 6) open space for aesthetic value. They also maintain and protect soil from erosion and naturally cycle nutrients and energy. With biodiversity decreasing at alarming rates, agriculturalists can make a positive impact on the environment through the feed they provide for their livestock. 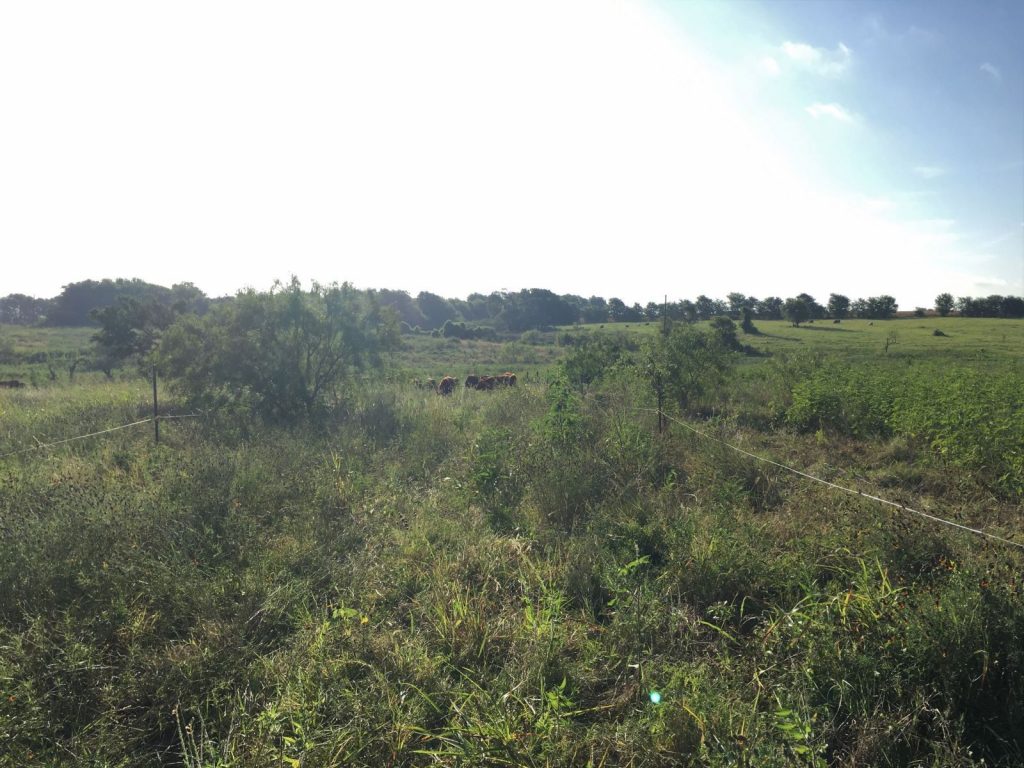 In this photo, we see the cattle moving through a lane on Ross Family Farm where Betsy Ross grazes 80 head of grass-fed cattle on 500 acres. The pastures have an array of plant species high in plant secondary compounds. Photo: Kara Kroeger, NCAT.

I have worked on a number of ranches that fostered diverse pastures for their livestock. The animals were grass-fed and were never given antibiotics (unless it was life threatening) or de-wormers. These cattle were managed adaptively and were moved once or twice a day to fresh pasture. They were not picky about what they ate and evenly grazed the plants in the paddock taking bites of between 30 and100 species of plants every day. The meat was lean and the flavor was so rich and satisfying.

We know that humans who eat a variety of 30 different types of foods (such as meat, grains, legumes, fruits, and vegetables) in a week tend to suffer from less disease than those who eat less variety. Why then would it not be the same for an animal? Many pastoralists have focused on forages that allow animals to gain weight and increase yields, but often the animal is lacking in a variety of phytochemicals that can prevent illness and improve the nutritional density of the meat and thus the humans who consume it.

One beneficial example is Chicory. Chicory is a range plant high in PSC that can decrease parasites in livestock. This forb has a deep tap root and ample above-ground vegetation. Its forage quality is similar to legumes when grazed in a vegetative stage. It has high digestibility, low neutral detergent fiber, high energy content, and high crude protein. It also contains a PSC called Sesquiterpene lactone, which inhibits hatching of gastrointestinal nematode eggs in many small ruminants such as goats and sheep. Additionally, fewer infective larvae are found on chicory leaves than on grasses and legumes. Chicory’s deep tap root will die and wither, aerating the soil while also adding soil organic matter that can fuel the soil microbe.

Plant species can be specifically cultivated for the land and type of livestock you are grazing. Legumes, including Sainfoin, Birdsfoot Trefoil, Purple Prairie Clover and White Prairie Clover, contain condensed tannins, which can reduce protein breakdown in the rumen and prevent bloat. Protein digested in the small intestine instead of by the rumen bacteria contributes to more efficient animal growth. If these tannin-containing legumes are seeded in a mixture with alfalfa they will “actively” reduce bloat risk.

These are just a few of the plants that have beneficial effects on human and animal health. We are just beginning to scratch the surface of understanding the chemical complexity of the foods we eat and the foods of the foods we eat. It is an exciting time in nutrition research not only for humans but for livestock, as well. The more efficient we can become at nourishing livestock while reducing the need for synthetic nutrients and medications, the better we may become at improving human, animal, and environmental ecology at the same time. Sounds like a win-win to me.

Please complete a brief survey to let us know your thoughts about the content of this blog.