There are several key insects that affect cherry production. Use this handy guide to help identify pests and to learn more about solutions. For more specific information about these diseases, or to learn about cherry diseases not addressed here, see ATTRA’s Cherries: Organic Production publication. 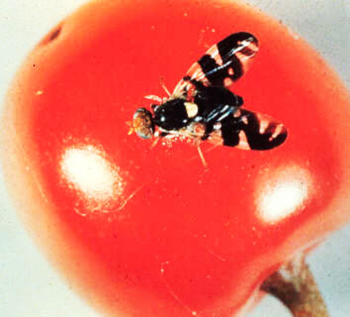 Cherry fruit flies spend roughly 10 months as pupae in the soil under the cherry trees, emerging as adults beginning in late May and continuing into July, depending on species and soil temperatures.

After a 10-day feeding and mating period, flies begin to lay their eggs just under the skin of the fruit. Eggs hatch in five to seven days, and the maggots (larvae) feed on the pulp of the cherry.

Failure to adequately control these pests can cause severe crop loss due to the presence of fruit fly larvae (maggots) in the cherries at harvest. 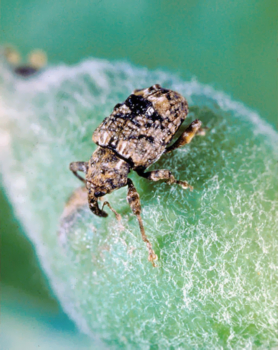 The plum curculio exists only in the eastern half of the United States.

Plum curculio damages fruit in three ways: 1) by direct feeding; 2) by laying eggs which become larvae and tunnel in the fruit; and 3) by spreading brown rot.

Beetles are more active on warm, damp, cloudy days and in thick, heavy trees that provide abundant dampness in the centers. 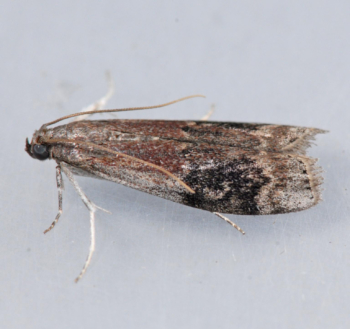 The adult is a small (less than one inch), light grayish-brown moth. Because it is nocturnal, it is seldom seen. There are two moth flights per year in most of its range. The first begins in mid-May and peaks about two weeks later. The second flight peaks near the end of July.

The female is attracted to gum exuded from wounds in the bark of stone fruit trees. It lays 20 to 50 eggs in a couple of days on or near this gum.

The number of larvae per tree is correlated with the severity of bark damage.

Use a hammer and a long screwdriver to pry back the bark where damage is apparent. Remove bark until live cambium is reached and look for larvae feeding along the edge of the live cambium or for cocoons attached to the inside of the bark. 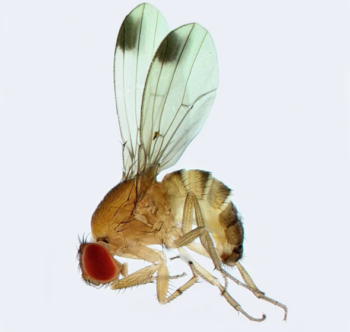 Spotted-winged drosophila (SWD) is a recently and accidentally imported “vinegar fly” that attacks fruit that is ripening in the field.

Damage takes the form of the “sting,” a small depressed spot on the fruit surface where the adult fly has laid her eggs under the skin, and then subsequent feeding damage by the maggots in the fruit.

Beneficial nematodes applied to the soil under cherry trees have provided 80 to 88% control of fruit fly pupae, which may provide sufficient control for the home grower. For commercial growers, however, both federal regulations and consumers demand a zero tolerance for maggots in fruit at harvest, so perfect control is necessary. In states with significant commercial cherry production, Cooperative Extension Service specialists offer phenological data and provide pest-management alerts to growers. Yellow sticky traps may indicate emergence too late. Spinosad, derived from a naturally occurring bacteria, is quite effective at controlling the fruit fly, and it is approved for use as an organic pesticide in cherry production. It has been used in combination with bait, as well as applied as a foliar insecticide. Sprays every seven to 10 days of Entrust, a spinosad-based product that kills flies both by contact and residue, have provided excellent fruit fly control when begun with fruit fly emergence.

Whole-orchard cultivation is moderately effective in controlling the curculio, but is too soil-degrading to be sustainable in most situations. Surround™ WP Crop Protectant, derived from processed kaolin clay, is an OMRI-approved organic pest control product shown to be effective for control of plum curculio. PyGanic™ is an OMRI-approved, pyrethrum-based (from the pyrethrum daisy), quick-knockdown, short-residual, broad-spectrum insecticide. PyGanic  can be employed against a wide variety of pests, but it will also kill beneficials. It is highly toxic to bees and should never be sprayed during bloom. Over-reliance on PyGanic or any pyrethroid for pest control can result in a “secondarily induced pest outbreak.” Finally, cherries infested with plum curculio larvae float, so they can be floated off and disposed of.

Generally, the greater the amount of existing injury from mechanical harvesting, cankers, and previous borer feeding, the greater the need for control. If 30% or more of the trees examined contain frass and damage is severe enough that 25% or more of the circumference of the trunk of each is girdled, an insecticide application is probably warranted.

Spotted-winged drosophila (SWD) is established on both coasts and is working its way inland, causing significant to devastating levels of fruit crop damage. Because the pest is so new, monitoring traps are still being perfected, but there are some currently in use. It is advisable to contact your state IPM specialists about this pest, since trapping and management options are still in flux. Currently, for organic growers, pyrethrum and spinosad-containing products are effective against the SWD. 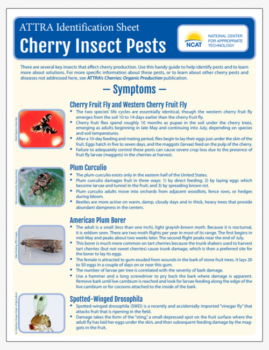