There are several key diseases that affect cherry production. Use this handy guide to help identify some diseases and to learn more about causes and solutions. For more specific information about these diseases, or to learn about cherry diseases not addressed here, see ATTRA’s Cherries: Organic Production publication. 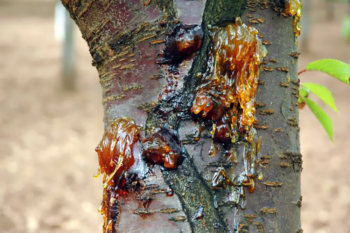 Young trees are infected at a higher rate than older trees. Symptoms include sunken, darker-than-normal bark, often around pruning wounds or cracks from winter injury.

Every part of the tree can be affected: leaf, fruit, twig, branch, trunk, and root.

Gummy, amber-colored exudates are common at infection sites. As the disease progresses, cankers expand and cracks appear. Leaves on shoots near the infection site turn yellow and droop. 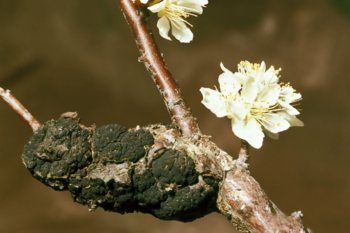 Cutting into the cambium in the suspected area will reveal orange-brown streaks extending into adjacent white, healthy wood.

Infection sites are on new growth, usually at the base of the leaf petiole or on a fruit spur. 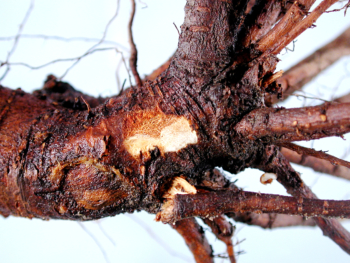 Phytophthora root rot can be a serious obstacle wherever the soil remains saturated or very wet for any appreciable period of time.

The main symptom is often an indistinct unhealthiness or lack of vigor.

If phytophthora is suspected, diagnose by pulling back the soil from around the crown and shallow roots and, using a knife to cut away the bark, looking for a reddish-brown discoloration of the cambium. 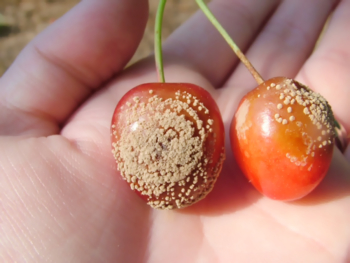 Two to three weeks before harvest, earlier infection of the fruit becomes apparent as the fruit softens approaching ripeness, causing rot both at harvest and in storage.

Brown rot often occurs in warm, humid climates and is more prevalent in the eastern United States than in the West.

Blossom blight during bloom is an indicator for extensive brown rot later in the season. 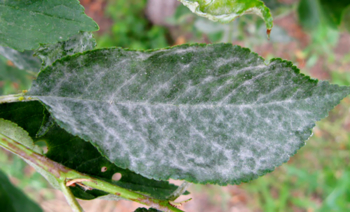 Trees can become severely stunted and defoliation is possible.

One of the few effective pesticides, copper, can itself be toxic, and overuse leads to resistant bacteria. There is some genetic resistance among cherry cultivars and rootstocks, but not enough to rely on it alone. In fact, multiple strategies will almost certainly have to be brought to bear to manage this devastating disease. Recommended strategies include not interplanting new trees with old, practicing orchard sanitation, avoiding summer pruning, and avoiding tree injury and irrigation water contact with leaves.

The knots are the primary source of inoculum for spread of the disease. In the spring, spores are released from infected areas and are moved by blowing rain. Trees should be checked several times throughout the season, and the knots pruned out by making cuts three to four inches below the knot. Pruners should be sterilized between cuts. A single lime-sulfur spray before budswell will reduce black knot problems.

The major controls are good site selection or site modification. Pick sites with light, well-drained soils and/or ditch and berm to ensure good drainage. Cherry roots are especially susceptible; thus, the oft-repeated warning, “Cherries don’t like wet feet.” Though there is no high level of resistance among the various cherry rootstocks, some are especially susceptible and others are moderately resistant.

Organic control of brown rot involves the integration of several tactics. Although not adequate for brown rot control by themselves, cultural practices and orchard sanitation are the first lines of defense. Planting-site selection and pruning are critical to providing sufficient air circulation and sunlight penetration within the canopy. Pruning to open the tree to sunlight penetration and good air circulation facilitates rapid drying of the foliage and flowers after rain or overhead irrigation. Organic growers have traditionally relied on sulfur or sulfur-containing fungicides to control brown rot, and nothing better has yet been developed. When the weather is hot and dry, the need to spray is not as great.

Cultural practices to reduce mildew include pruning to facilitate drying of fruit and foliage. More open training systems inhibit mildew. Organic control is possible with sprays of sulfur, but the “softest” organic control is probably with frequent applications of baking-soda based eradicant products like Kaligreen™ and Milstop™. 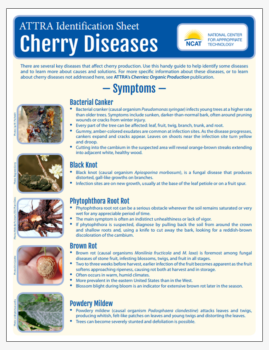