How Fecal Egg Counts Can Help You Fight Parasites

The Barber Pole Worm (Haemonchus contortus) ultimately becomes a major source of concern on every irrigated or high-rainfall sheep operation. It has a proven track record, and one that has resulted in areas of the United States becoming unable to raise sheep or goats. Fecal Egg Counts (FEC) and FAMACHA are two of the main tools that producers have for successfully reducing Haemonchus infections. These two tools go hand in hand. Be sure to read the first tip sheet in this series, Why FAMACHA Score?

Happy sheep on pasture can be jeopardized by parasites. We can keep them healthy and happy.

Resistance. This is the sheep’s ability to avoid Barber Pole infection in the first place. The mechanism is not well known. It is thought that a resistant sheep’s immune system in some way reduces the Barber Pole Worm’s ability to penetrate and extract blood from the abomasal wall.

Resilience is the animal’s response to Barber Pole infection. One avenue of mitigation by the host animal is increasing the amount of red blood cells in the blood stream. There may be more responses.

We can use our knowledge of resistance and resilience to understand where fecal egg counts fit into parasite management. First, by themselves, fecal egg counts do not do a very good job of indicating if a sheep is in need of deworming. This is because a ewe or lamb moderately (1,000 eggs per gram) or even heavily (>3,000 epg) infected with parasites may be sufficiently resilient to the infection and show no clinical signs (FAMACHA score of 1 or 2). This animal does not need treatment. It needs to be watched carefully, however, with follow-up FAMACHA scoring in two weeks. Conversely, an animal may have only 500 epg but a FAMACHA score of 4. This animal most definitely needs to be dewormed, or else death may occur.

There is no better clinical indication of Barber Pole Worm than the FAMACHA score. Use it in deciding which animals to deworm when Haemonchus is the major parasite in a pasture. Given that, what role do fecal egg counts play in parasite management? 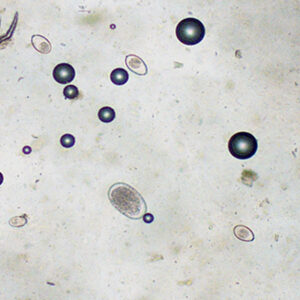 Strongyle eggs are two to three times the size of Coccidia eggs. This makes the two easily distinguishable. Air bubbles are a quick reference structure that you can focus on. Photo: Bob Storey, UGA College of Veterinary Medicine

Tapeworms (Moniesia), even though they look terrible, have no documented production loss in sheep (Zajac, 2014a).

How Can I Learn How to Do Fecal Egg Counting?

Fecal egg counting technique is easily learned. It requires the use of a $300 microscope and some accessories. Many veterinarians will charge $25 per FEC so you can pay for the microscope in a few seasons and be that much more self-sufficient. Again, see the video, Why and How to do Sheep and Goat Fecal Egg Counting.

Special thanks to Dr. James Miller, DVM, Professor of Pathobiological Sciences, School of Veterinary Medicine, Louisiana State University for his consultation on this tipsheet.

Morgan, James. 2005. A Friendly and Encouraging Challenge to the Agricultural Extension Community: A low cost tool that can greatly influence management of internal parasites in small ruminants.

This publication is produced by the National Center for Appropriate Technology through the ATTRA Sustainable Agriculture program, under a cooperative agreement with USDA Rural Development. This publication was also made possible in part by funding from the National Institute of Food and Agriculture, U.S. Department of Agriculture, under award number 2016-38640-25383 through the Western Sustainable Agriculture Research and Education program under subaward number EW 17-011. ATTRA.NCAT.ORG. 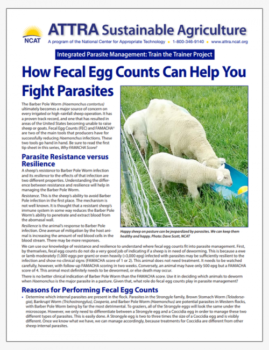