There are several key diseases that affect pear production. Use this handy guide to help identify diseases and to learn about causes and solutions. For more specific information about these diseases, or to learn about pear diseases not addressed here, see the ATTRA publication Pears: Organic Production. 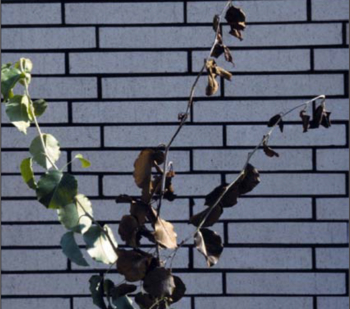 Infec­tion is triggered by heat and moisture and is transmitted by bees, aphids, psylla, or other insects and spread by blow­ing wind and rain.

Affected branches wither and turn black or brownish black, as if scorched.

Most infected branch tips wilt rapidly, taking on the characteristic shape of a shep­herd’s crook. 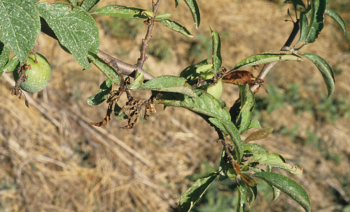 Blossom blast can also cause twig dieback and bark cankers and may lead to severe wood damage.

Because the presence of blos­som-blast bacteria allows ice crystals to form at higher-than-normal temperatures, the disease increases the incidence of freeze damage dur­ing cold, wet weather. 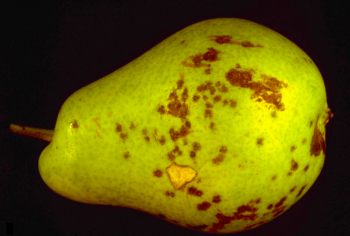 Pear scab causes lesions on leaves, shoots, and fruit, and infects twigs, where it can overwin­ter.

Can cause economic damage by marring the appearance of the fruit. 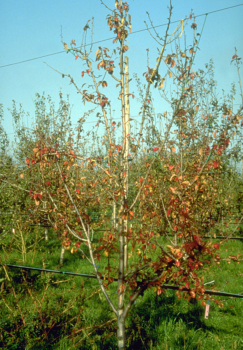 Full expres­sion of the disease depends greatly on rootstock susceptibility.

The phytoplasma organism that causes pear decline is vectored by pear psyllae. 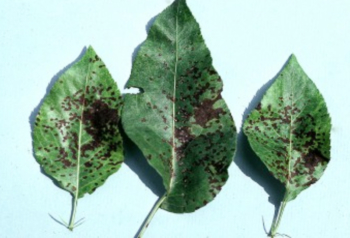 Susceptible cultivars can be defoliated, resulting in reduced buds and dwarfed or—if the fruit itself is infected—unmarketable fruit.

Cultural practices that favor only moderate growth of trees are recommended, including using only half as much compost as for apples, never using fresh manure, and avoiding heavy understory populations of legumes. Avoid heavy pruning. Choosing fire-blight-resistant pear cultivars is a good start to managing fire blight. Biocontrols, non-pathogenic com­petitors with E. amylovora, occupy the same sites provided they get there first. In order to be effective, these should be applied to newly opening flowers. Bordeaux mix (copper sulfate and lime) and other copper formulations sprayed at green-tip stage are organic options that provide some protection from fire blight infection. Once fire-blight infection has occurred, there is no spray or other treatment, beyond quickly cut­ting out newly infected limbs, that will mini­mize damage.

Controlling this disease is difficult because its occurrence is widespread on many plant spe­cies and not easily predicted; once symptoms appear, control efforts are too late. Protecting orchards from frost damage can limit injury. An early application of BlightBan A506 can help reduce frost-damage potential by exclud­ing the ice-nucleating bacteria. Application of fixed copper at the green-tip stage followed by streptomycin at early bloom has provided reasonable control in some regions.

Pear cultivars differ in their susceptibil­ity to scab. Organic control usu­ally consists of treatment with sulfur, lime sulfur, or Bordeaux mixture. The Mills Table can be used to predict infection periods.

Pear decline can be spread by grafting and budding with infected propagation wood, but is vectored by pear psyllae. Good pear-psylla control can prevent the disease and even results in dis­ease remission. Many rootstocks are resistant. Other control methods include keeping the tree in good vigor with proper weed control, water management, and fertilization.

Sprays for pear scab, such as Bordeaux mixture, will generally control these two maladies as well. Also, Sur­round™, a kaolin-clay-based insect repellant, is registered and labeled for suppression of fabraea leaf spot. 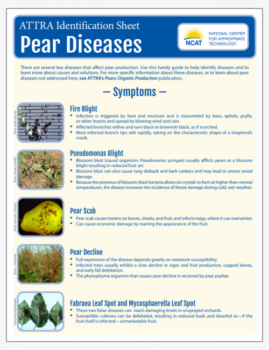