NCAT’s Small-Scale Intensive Farm Training program (SIFT) operates a demonstration farm in Butte, Montana. This publication reports on the production successes and challenges of 2018 at this high-altitude urban farm and describes a number of ongoing research projects. It also explains how farm practices will be modified in the future, based on this year’s results. 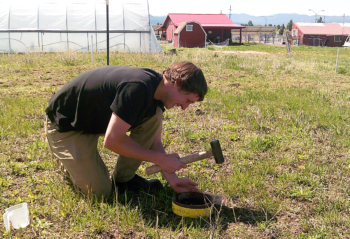 The National Center for Appropriate Technology’s Small-Scale Intensive Farm Training program (SIFT) was created to help communities everywhere increase food security by producing their own healthy food. SIFT is developing a working, sustainably managed, demonstration farm on three acres at our Butte, Montana, headquarters. This farm has begun to serve as the backdrop for an intensive, hands-on training program that will teach farmers and future farmers, urban food producers, community leaders, and citizens how to produce high-value, nutrient-rich food commercially on small parcels of land.

By 2018, the SIFT farm had operated for several years, and this year the program team has completed several projects, launched some new endeavors, and adjusted the farm’s operation based on experiences in previous years. This case study of farm activities discusses some of the challenges and successes experienced in 2018. Sharing our experiences may help other urban farmers address similar issues that they encounter with their own operations.

One of the primary purposes of the SIFT farm is to demonstrate sustainable local food production to the community. The farm does this in several ways. First, a number of vegetable beds are dedicated to use by the local YMCA. From mid-June until mid-September, children enrolled in the local YMCA summer camp program repeatedly visited and worked in this section of the farm under the guidance of a Food Corps volunteer. Based on this experience, plans for the future include adding compost and mulch to this growing area over the winter, raising the beds slightly to help the children define the planting areas, and starting to use compost bays near this area. Also, in the future, SIFT farm staff will plant the first vegetables in this area when they plant the main farm beds, to increase production for the YMCA and allow the children to harvest produce earlier in the season. 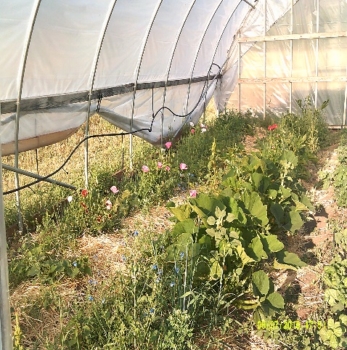 The SIFT farm hosted five public workshops during the summer season, on composting, cover crops, a general farm tour, produce and varieties grown, and high tunnel construction. In addition, school groups ranging from elementary to high school visited the SIFT farm to learn and, in some cases, to experience farm work. Farm staff also conducted a variety of outreach activities at local schools and events, and they documented work at the SIFT farm for the public through a series of blog posts and podcasts.

In 2018, NCAT decided to donate the produce to local charities that distribute food within the community. These included the Butte Emergency Food Bank, a nonprofit that developed a “pay what you can” restaurant called the Community Café, the Dish-Ability food cart that helps teach people with developmental disabilities essential work skills, and a SNAP-Ed Nutrition class that teaches SNAP benefit recipients how to eat healthy and make their food dollars go further.

In addition to the donated produce that comprised 88% of the farm’s 2018 production by weight, SIFT also produced and sold smaller quantities of specialty crops. These included chicken eggs, plants, and salad mixes sold to NCAT staff, as well as fresh mint harvested and sold to Headframe Spirits. In 2018, the SIFT farm produced a total of 485 pounds of food with an estimated market value of $2,473.

Aside from the short growing season that makes vegetable production an ongoing challenge at Butte’s high elevation, several factors limited production in 2018. Brassicas were eaten by deer, and a fungal disease killed tomatoes. Another issue was poor germination caused by a timer malfunction during a drought, resulting in low yields of beans and green onion and a delayed carrot harvest. In addition, weed pressure from perennial grasses had a widespread effect on many of the outdoor blocks.

The yield data for 2018, shown in Table 1, reflects low yields of beans, green onions, and brassicas. It also shows that there were large yields of squash, garlic, and lettuce. Garlic was the highest-value crop, although squash was the highest-yielding crop.

Soil testing of an asphalt area just beyond the northern end of the SIFT farm in 2018 revealed that it was contaminated with a significant amount of heavy metals, exceeding the local action levels for both lead and arsenic. The area was being considered for a project using plants to reclaim heavy-metal-contaminated soils in situ. The Superfund Division of the City-County of Butte-Silver Bow recommended that no food products be grown in this area unless they are in raised beds with no contact to the soil below.

Other areas on the farm were checked for heavy metals and showed concentrations of arsenic and lead in line with the background concentrations in the Butte area and below residential cleanup action levels. The contamination of the asphalt area likely stems from prior land use as an automobile workshop. For more information on identifying and dealing with contaminated soils, consult the ATTRA publication Start a Farm in the City. 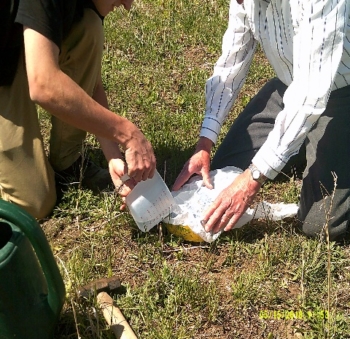 Testing of cover crop performance continued in 2018 with a custom eight-seed mixture changed slightly from the eight-way mix used in 2017. Oats were used in both mixes, but teff grass and pearl millet were replaced in 2018 with ryegrass and triticale. Austrian winter peas, phacelia, and turnips remained, but the forage chicory and white mustard were replaced with sweet clover and hairy vetch in 2018. Once again, two crops did not establish – ryegrass and sweet clover this time – emphasizing the benefits of an eight-species mix over the risk of a one- or two-species mix that might not establish.

Interestingly, soil-nutrient testing on the cover cropped areas showed less soil organic matter, less carbon, and less nitrogen in the soil in 2018 than in 2017. This may reflect a difference in the areas tested or the soil condition, but it does indicate a need for additional testing in future years. Infiltration tests were also conducted in the area, to set a baseline against which future infiltration tests can be compared.

Another special project at the SIFT farm involves planting and evaluating the performance of cold-hardy fruit species. Additional plantings were completed in 2018 of species planted in 2017: Nanking cherries, Romance-series bush cherries, and several varieties of honeyberry or haskap. In 2019, cuttings from these plants will be propagated to fill gaps where some plants have not survived.

Green lentils representing a pulse crop were planted in a demonstration plot in 2018. This area had previously been planted to a cereal grain (barley) and will be rotated to a different pulse crop or an oilseed crop in 2019. 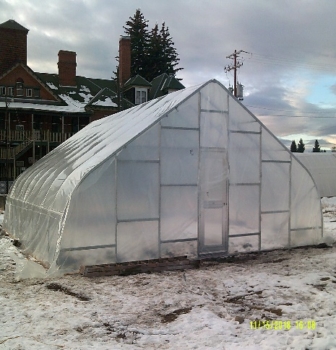 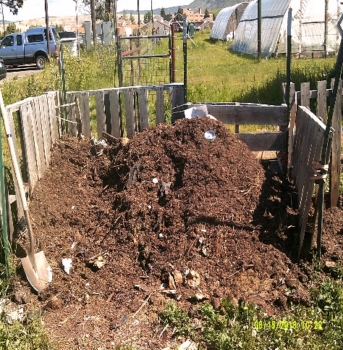 Early in 2018, the chicken flock at the SIFT farm suffered from predation losses that halted egg sales. This necessitated the construction of an outdoor pen to serve as a safe area for the chickens during evenings and weekends. With a new flock of chickens and a lighting system, egg production and sales are expected to resume and continue.

Compost production was successful at the SIFT farm in 2018, aided by construction of a site-built compost tumbler for less than $25. In addition, staff constructed a land roller from three tires and rims that cost $30 to obtain from a local scrap yard.

In 2018, total expenses continued to drop from past years, as one-time expenditures associated with start-up were completed and water use was reduced.

As the SIFT farm shifts to producing mostly for food-assistance programs, the crop mix will change to better accommodate the program needs. Consequently, production will focus on lower-value crops that can be harvested in bulk and distributed to more people. For example, the SIFT farm will be adding potatoes into the crop rotation in 2019 and increasing production of cabbage, carrots, and squash. Staff will find alternative outlets for herbs and greens that are important to grow for the sake of biological diversity but not easy for the food bank to handle.

Strategies for specific crops will also change somewhat to meet the program’s new aims. For example, specialty greens will be planted at a wider spacing, rather than broadcast-seeded for harvest as baby greens. Utilizing wider spacing and allowing the plants to mature results in multiple cuttings and better yields, extending late into the season. Brassicas will be planted in a high tunnel to prevent deer predation. Finally, fixing an irrigation problem should lead to better germination and greater yields in 2019. 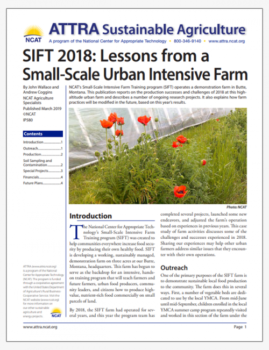