Genetic-selection tools can lift a seemingly grim parasite situation into a landscape that has hope. It will not happen in a year, but after several generations of careful breeding, you will begin to see some improvement in the resistance of your flock to the Barber Pole Worm, Haemonchus contortus. As in any other successful breeding program, focus on selecting for a balance of resistance and the other important economic traits, such as the number of lambs born, and maternal weaning weight. There are three genetic-selection tools we producers can use to lessen the impact of Haemonchus in our flocks: fecal egg counts, FAMACHA scoring, and National Sheep Improvement Parasite Estimated Breeding Values. This tipsheet is intended to supplement the informative ATTRA publication, Tools for Managing Internal Parasites in Small Ruminants: Animal Selection.

When selecting individuals within flocks for potential replacements, there is one primary rule: your animals must be exposed to a parasite challenge. For example, if your average fecal egg count is not greater than 500 eggs per gram (epg), you do not have enough infection in the flock to genetically select for Haemonchus-resistant sheep. Similarly, if you are using FAMACHA scores to select for breeding replacements, at least 25% of your lamb population must score F3 to F5 (Morgan, 2018).

This rule also applies when purchasing breeding stock from other flocks. If your breeder is advertising sheep that are seldom dewormed while on irrigated pastures, you don’t know if they are parasite resistant or if they have never been challenged. For this reason, parasite challenge is a requirement of all NSIP-proven sires. Sometimes the most obvious is forgotten.

Selection for parasite-resistant sheep is well worth the trouble of identifying superior individuals in our flocks. Here is how:

So then what? How can you select for genetic resistance to the Barber Pole Worm in a large flock?

FAMACHA is another technique that can be used to identify sheep that are less susceptible to the Barber Pole Worm. It actually measures the sum of resistance and resilience, but for large flocks, it is a practical alternative to egg counts. You can FAMACHA score 150 animals an hour which is 25 times faster than performing fecal egg counts. Here is one procedure:

Daily moves produced a paddock stocking density of 257 ewes and 368 lambs/acre. Lambs were weaned July 23 and stayed on pasture until September 4. On each of the FAMACHA scoring dates, we dewormed all the lambs that scored FAMACHA 3, 4, and 5. Two points:

Get There Faster: Use Estimated Breeding Values

As previously mentioned, sires have an incredible amount of influence on flock genetics. Estimated Breeding Values developed by the National Sheep Improvement Program provide the fastest way to make tangible improvements in parasite resistance. Coupled with grazing practices to limit worm ingestion (as described in the tipsheet Graze to Control Parasites), these two strategies represent a long-term solution to Barber Pole Worm control.

Purchasing outside rams with elite Estimated Breeding Values in parasite resistance (PFEC) is not only easier than selecting with fecal egg counts and FAMACHA scoring, it is a much more powerful way to make genetic progress in this trait. Currently, Katahadin and Polypay breeds have estimated breeding values for parasite resistance. Hopefully, in the coming years, more breeds will follow.

To select sires for ewe replacements, determine your production goals for the primary traits you wish to improve. Since genetic progress will be slower by selecting for a large range of traits, try to focus on two or three of the traits in the flock with the highest priority. For example, a sheep producer primarily selling lambs on irrigated pasture needs a large number of lambs born, enough milk in the ewes to raise twins successfully, and parasite resistance in both the lambs and the ewes. If losses due to the Barber Pole Worm are significant, make that your number-one priority and choose a ram with a parasite PFEC EBV in the top 20% of the breed. The number of lambs born (NLB) and maternal weaning weight (MWWT) can be assigned secondary priorities, and rams with trait EBV’s in the top 40% nationally should also be included in your index. These rams can be purchased through private treaty (respective breeders are listed in the NSIP database) or in national ram sales. The searchable NSIP database and a guide on how to use it  are available.

The Polypay and Katahdin breeds that currently have PFEC EBV’s will admittedly not fit into everyone’s breeding program. The sheep industry needs to push for more breeds to develop PFEC-proven rams. Until then, breeding-flock selection using fecal egg counts and FAMACHA within flocks and in flocks with contemporaries (a minimum FEC mean of 500 epg and, ideally, similarly-sired offspring) are the tools that can be used. If not ideal, they are still a giant and pragmatic step forward.

Selecting for genetic resistance for parasites is one of the leading tools we can employ to combat the Barber Pole Worm. For flocks on irrigated pasture, future success may depend upon it.

This publication is produced by the National Center for Appropriate Technology through the ATTRA Sustainable Agriculture program, under a cooperative agreement with USDA Rural Development. This publication was also made possible in part by funding from the USDA, NIFA, OREI, award 2010-51300-21641; and the Southern Region Sustainable Agriculture Research and Education, award 2005-51300-02392. ATTRA.NCAT.ORG. 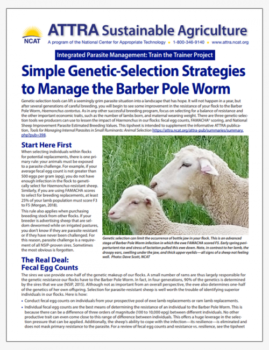