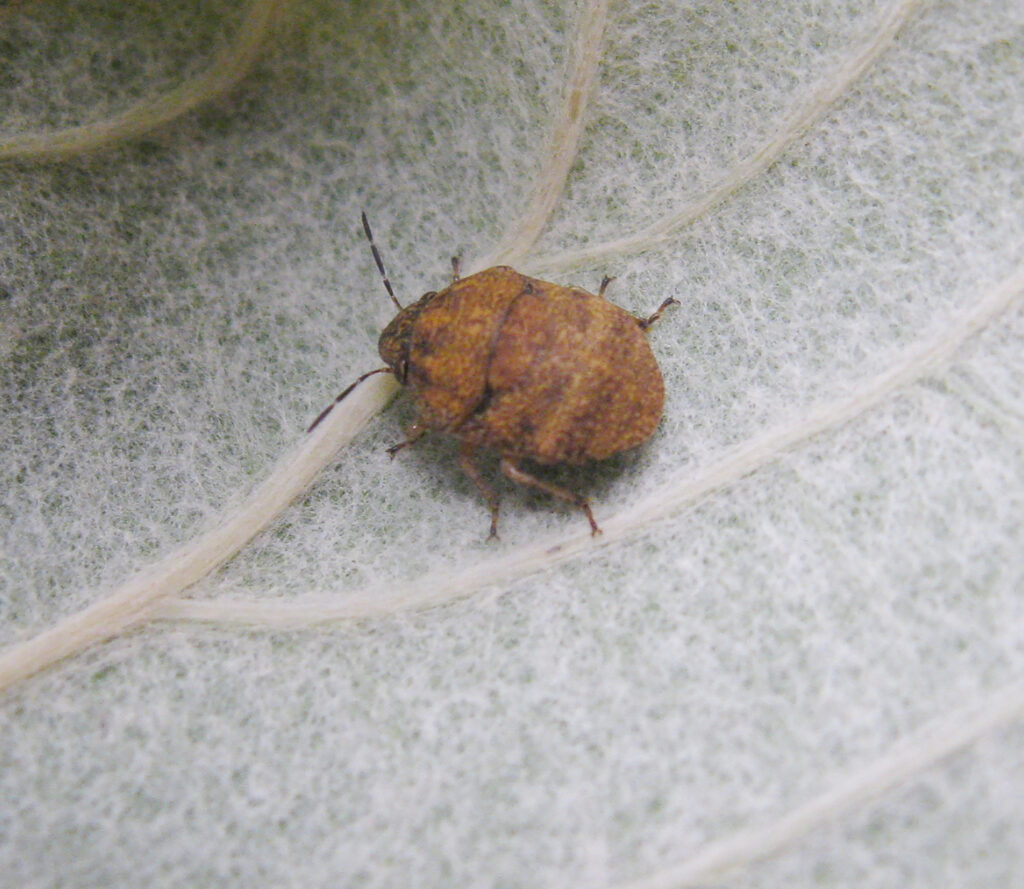 Stink bugs cause injury to fruits, seeds, and leaves. They can also serve as vectors for disease. This Orsilichedes is causing leaf curl damage on the wild grape it is feeding upon. Photo: Justin Duncan, NCAT

Stink bugs are true bugs, family Pentatomidae of the Order Hemiptera, that affect many host plants. One such is Nezara viridula, the southern green stink bug. These bugs leave yellow, calloused blotches on tomatoes and cause them to have an off-flavor. Stink bugs come in many sizes and shapes. Many true bugs are pests, but some are quite beneficial. This causes confusion because some of the predators are shaped or pigmented in similar configurations as pests. The brown stink bug, brown marmorated stink bug (BMSB), and spined soldier bug are all very similar to the untrained eye. All three are brown, but there are subtle identifying differences.  The BMSB has distinct triangular shapes on either side of its abdomen and lacks shoulder spikes. Brown stink bugs have shoulder spikes like spined soldier bugs but lack the black crenelation that both the BMSB and spined soldier bugs have. Spined soldier bugs also have a black stripe at the end of their wings that looks almost like a tail.

Stink bugs don’t like mint (Bunn, 2014). They generally shy away from strong-smelling plants. This may be because they rely on their own strong smell for defense and signaling to females (Aldrich et al., 1987). Mint oil can be used to deter stink bug pests on vegetables. Mint oil has low phytotoxicity (Papatsakona et al., 2013)

Garlic is another strongly scented herb that can be used to deter stink bugs. Freshly blended and strained cloves should be sprayed onto affected plants, ensuring that the undersides of the leaves are thoroughly covered. Three large crushed or blended cloves added to a liter of water in a spray bottle and applied every few days should deter stink bugs from bothering crops like tomatoes. 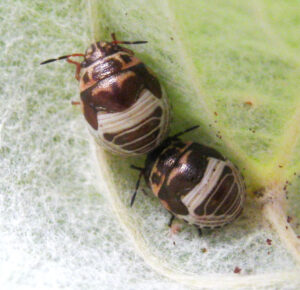 Thyme has been found to lethal to eggs, nymphs, and adult stink bugs. It is both a contact poison to them and a fumigant and a repellent. The trick is the concentration. It takes a great deal of thymol to kill an adult green stink bug (Nezara) versus a nymph, so it is best to spray for nymphs for efficiency’s sake but even better to use it as a repellent. The rates for the essential oil use for repellency is 20 ml per liter for nymphs and 40ml/L for adults, killing nymphs is 22ml per liter but killing adults takes an excessive 180ml/L. (Gonzalez et al., 2010). Alternatively, a couple handfuls of thyme fresh from the garden could be run through a blender with water, strained and sprayed using a spray bottle.

Oregano essential oil was also found to be effective at repelling and killing stink bug eggs, nymphs, and adults, although not at the potency of its cousin, thyme. Using oregano essential oil requires about double the amount of oil to do the same job as thyme essential oil (Werdin-Gonzalez et al., 2010). One reason may be that in thyme essential oil, thymol constitutes about half of the total composite, while oregano is more fractionated. Often, there are several different essential oils that can come from one plant. Some of them will be more effective at killing or repelling pests than others. This explains why oregano oil is not as effective as thyme, which has a higher concentration (larger fraction) of a potent chemical constituent (i.e., thymol). 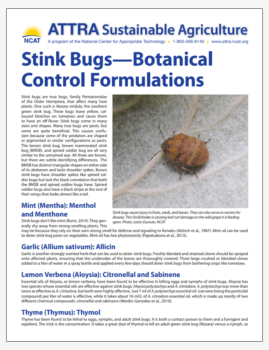