Prime agricultural land can be scarce and expensive. With worldwide population growth, the demand for both more food and more land to grow food is ever increasing. But some entrepreneurs and farmers are beginning to look up, not out, for space to grow more food.

One solution to our need for more space might be found in the abandoned warehouses in our cities, new buildings built on environmentally damaged lands, and even in used shipping containers from ocean transports. This solution, called vertical farming, involves growing crops in controlled indoor environments, with precise light, nutrients, and temperatures. In vertical farming, growing plants are stacked in layers that may reach several stories tall. 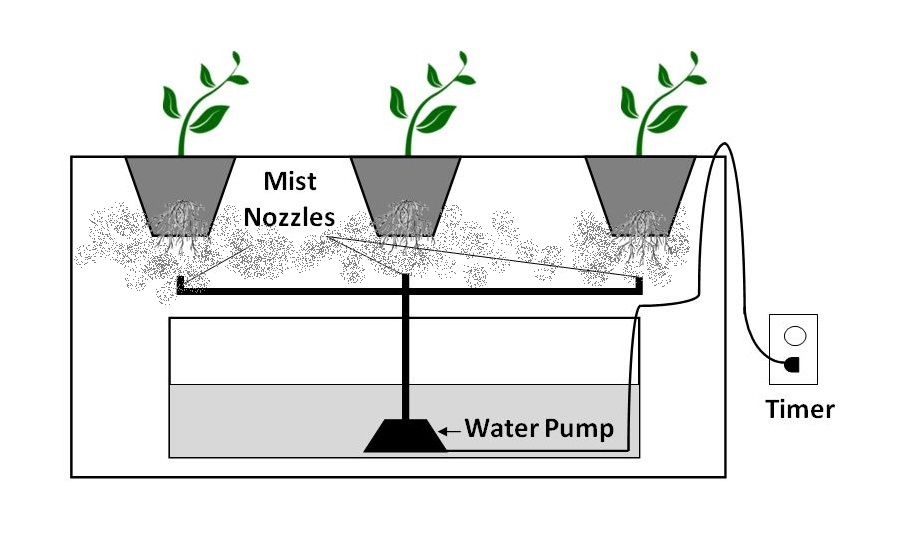 Although small, residential vertical gardening (including window farms) has been around for decades, commercial-scale vertical farms have only been seriously examined in the United States for the past few years. As of early 2015, the United States had only a handful of commercial vertical farms under operation. But the interest in this new farming technology is growing rapidly, and entrepreneurs in several American cities are taking a serious look at this innovative farming system.

Vertical farms come in different shapes and sizes, from simple two-level or wall-mounted systems to large warehouses several stories tall. But all vertical farms use one of three soil-free systems for providing nutrients to plants—hydroponic, aeroponic, or aquaponic. The following information describes these three growing systems:

The predominant growing system used in vertical farms, hydroponics involves growing plants in nutrient solutions that are free of soil. The plant roots are submerged in the nutrient solution, which is frequently monitored and circulated to ensure that the correct chemical composition is maintained. 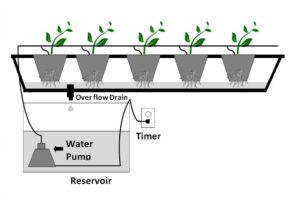 The National Aeronautical and Space Administration (NASA) is responsible for developing this innovative indoor growing technique. In the 1990s, NASA was interested in finding efficient ways to grow plants in space and coined the term “aeroponics,” defined as “growing plants in an air/mist environment with no soil and very little water.”

An aquaponic system takes the hydroponic system one step further, combining plants and fish in the same ecosystem. Fish are grown in indoor ponds, producing nutrient-rich waste that is used as a feed source for the plants in the vertical farm. 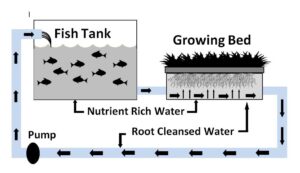 The plants, in turn, filter and purify the wastewater, which is recycled to the fish ponds. Although aquaponics is used in smaller-scale vertical farming systems, most commercial vertical farm systems focus on producing only a few fast-growing vegetable crops and don’t include an aquaponics component. This simplifies the economics and production issues and maximizes efficiency. However, new standardized aquaponic systems may help make this closed-cycle system more popular.

Vertical farming systems can be further classified by the type of structure that houses the system. 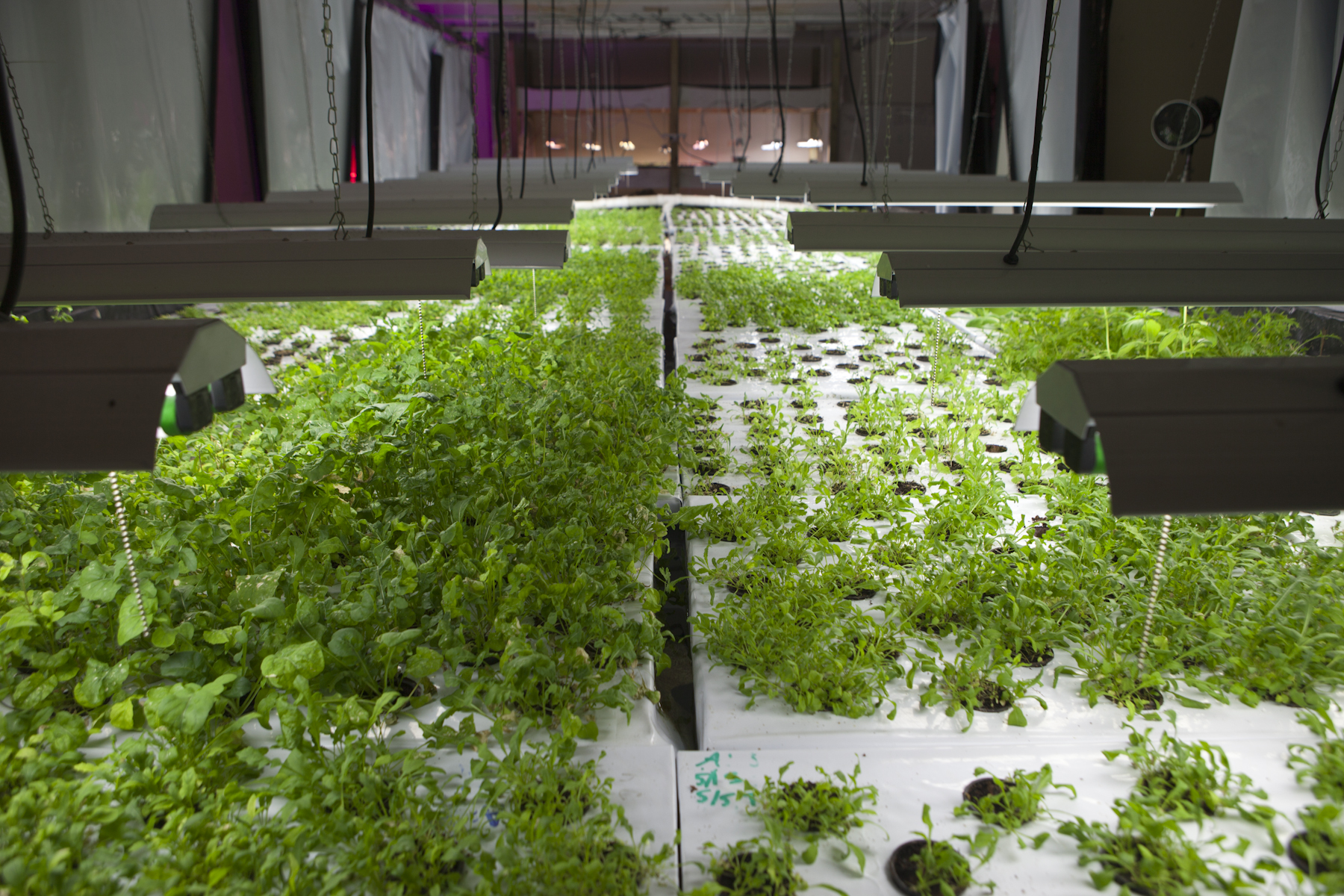 Building-based vertical farms are often housed in abandoned buildings in cities, such as Chicago’s “The Plant” vertical farm that was constructed in an old pork-packing plant. New building construction is also used in vertical farms, such as the new multistory vertical farm being attached to an existing parking lot structure in downtown Jackson Hole, Wyoming (see Case Study 2). 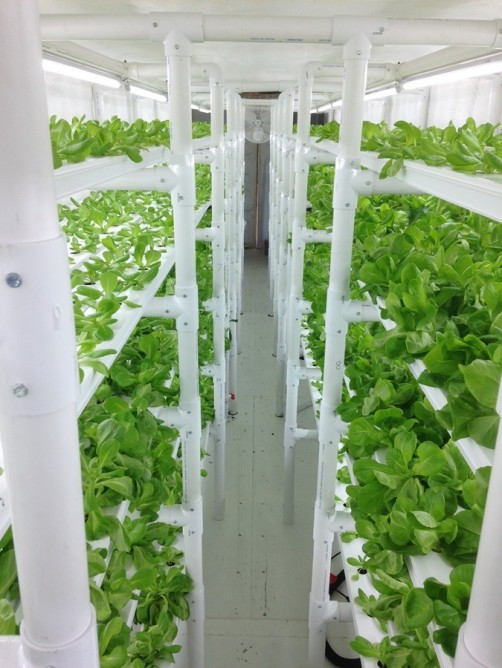 Shipping-container vertical farms are an increasingly popular option. These vertical farms use 40-foot shipping containers, normally in service carrying goods around the world. Shipping containers are being refurbished by several companies into self-contained vertical farms, complete with LED lights, drip-irrigation systems, and vertically stacked shelves for starting and growing a variety of plants. These self-contained units have computer controlled growth management systems that allow users to monitor all systems remotely from a smart phone or computer. Three of the leading companies producing shipping-container vertical farms are Freight Farms, CropBox, and Growtainers (See Case Study 3).

What Are the Pros and Cons of Vertical Farms?

Dickson Despommier, in his book The Vertical Farm: Feeding the World in the 21st Century, listed a number of environmental and social benefits of vertical farming. The following is an adaptation of Despommier’s major points (Despommier, 2011): 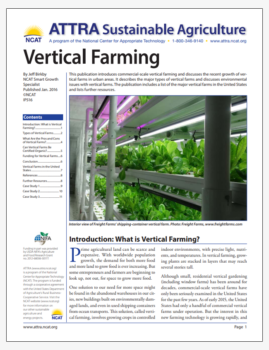