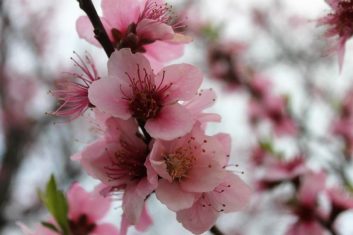 Peach flowers from a previous spring, a sight we won’t be seeing much of this year because of the deep freeze. Photo: Guy Ames, NCAT

Better Than I Feared but Worse Than It Looks

A dipping polar vortex delivered a cruel and chilling Valentine’s gift to the Midwest and South on Valentine’s Week 2021. The damage in Texas may be among the worst. It certainly garnered the most headlines. An estimated $300 million winter citrus crop in the Rio Grande Valley is gone. Gone. Worse, it’s likely that the trees in the valley suffered damage, the full extent of which won’t be known for weeks and possibly months. To the non-fruit-growing observer, the trees might look fine but they’re not. It’s worse than it looks.

Near Fayetteville, Arkansas, where I live and grow fruit, we broke the all-time winter cold record at our local airport, Drake Field, when we hit -20 degrees F. (The all-time Fayetteville low is -24 set in 1899.)  At my own ridgetop farm, by virtue of elevation about 500′ higher than Drake Field, we escaped the worst, recording -12. Still, that was about 12 degrees colder than the zero that was predicted, and I feared the worst for my muscadines and my two 3,000-gallon cisterns, which I hadn’t drained. Frankly, I feared those cisterns would be ruptured and rendered worthless (they weren’t). And like the Texas citrus growers, I won’t know the full extent of the damage to my muscadines for some weeks to come. They look okay, but I know from experience that they’re not.

Climate change is laden with paradoxes. Overall, it’s clear that the planet is warming. To the Valley citrus grower seeing his oranges frozen and on the ground, it’s hard to believe that the polar vortex is a product of climate change, but it is. Climatologists can explain it in detail, but I hope it will suffice to say here that the added warmth to our planetary system leads to more extreme events: more severe storms, more severe droughts, more extreme heat events and even some extreme cold events. These extremes and the uncertainty surrounding them are worrisome for all farmers, but for the growers of perennial fruits the worry runs even deeper.

An apple grower can’t replant every time a late frost ruins one year’s crop. An apple tree takes years to produce its first crop, and it must produce several crops before it pays back the years of investment. By contrast, a soybean or corn grower might have a couple opportunities to replant in any given year if an untimely freeze wastes his first young seedlings. I’m not saying this is pleasant or comes without expense to the soybean or corn grower, but all is not lost!

But Valentine’s Week 2021 was not just a late frost. This was potentially a tree, bush, and vine killer. Apples, pears, peaches, blueberries, grapes, and all other deciduous perennial fruits have evolved physiological mechanisms to escape death from winter’s cold. Together these mechanisms are known as dormancy. The tree, vine or bush puts itself into a sort of deep sleep that keep it safe until better, warmer conditions return. These perennial plants, depending on the climate where they evolved, will have longer or shorter dormancy periods which can vary among plants. A species, or even a variety within a species, will have a “chilling requirement,” which means that that species or variety must have a certain amount of cold before it can come out of dormancy. This is a safety mechanism keeping the plant from waking up too early when temperatures might still be fatally cold. This all works very smoothly in a more-or-less stable climate. But in an unstable climate characterized by too-warm winters, late spring freezes, and sudden and severe cold snaps, the plant can become confused and come out of dormancy partially or completely and get damaged or killed.

The increasing frequency of such freeze damage events in fruit crops is well-documented and presented in ATTRA’s Climate Change and Perennial Fruit and Nut Production: Investing in Reslience in Uncertain Times. The most common form of this damage is frost killing the flowers, and thus the crop, of fruit plants. This is because the warmer winters are inducing earlier bloomtimes for these crops while the dates of the last killing frost remain roughly the same. For instance, apples might bloom in March now in NW Arkansas—a month earlier than 50 years ago—only to have the flowers or young fruitlets killed by a frost on April 10. This very thing has happened to me with varying degrees of crop loss the last three seasons!

Splits in a pawpaw’s trunk from a previous year’s damage. We won’t see this yet from this year’s cold snap—right now the trunks look fine. This type of damage may not become visible for weeks or months. Photo: Guy Ames, NCAT

But a more serious form of damage is the potential loss of whole plants when warm winter temperatures render the plants’ tissues tender…and then a cold snap roars in like this one on Valentine’s Week 2021.

It turns out that, for me, this extreme event was not as bad as I had feared.  The pears, apples, bunch grapes and blackberries all look okay, though damage could still manifest later.  Looks like I’m going to have some trunk cracking on a few pawpaw trees. Blackberry and blueberry plants probably lost some fruit buds, but it looks like the plants were spared. The peaches suffered worse, with 99% of the flowers lost in the bud (before they could even open), but the trees seem largely undamaged. And this is exactly how nature planned it. Most of these cold hardy species came through just fine. Even if the crop is lost or partially lost, the plant will live to try again next year.

I can’t tell quite yet how bad the damage is to the muscadines, but I expect that I probably lost some whole vines, at least to the ground. Resprouts from the roots can replace these but I will still have lost a couple years of cropping before the new vines will begin fruiting. Looking at the southern extent of the freezing temperatures, this will probably be true for muscadines all over Arkansas and probably throughout the South.

The main trunk of this muscadine was killed by the cold in a previous year, but the roots sent up new growth. Photo: Guy Ames, NCAT

In the parts of the South where sub-tropical plants like figs, Asian persimmons, pomegranates, black mulberries, loquats, and similar plants can grow, these will probably be devastated. Some of these, like the figs, can come back from the roots. Luckily, the snow that accompanied the cold provided some insulation keeping soil temperatures considerably higher than the air temperatures. But there will be heart-breaking losses to many homeowners and some commercial growers. I’m thinking sadly of some of the huge dooryard fig trees in East Texas where I grew up that are most likely doomed.

Truthfully, I feel lucky. It’s not as bad as I had feared. Probably most of the fruit growers farther north from me will only suffer minor damage. It’s the folks who grow perennial fruits farther south that are and will be experiencing the worst losses. If you’re not a fruit grower you probably won’t be able to tell but it’s almost certainly worse than it looks.

All photos by Guy K. Ames.