A Garden of Hope: The Hub of Prosperity

Sometimes, old ideas resurface. In the same way, farms can gain a new life after perceived abandon. The beliefs and mindsets the farm embodies emerge with it. They may take a different semblance, but fundamentally, they carry the same hope, regenerated from the ground up. The Hub of Prosperity carries the dreams and hopes of the Magic Valley of the Rio Grande Valley. It is an ode to the land’s rich agriculture history, while practicing novel approaches to land tutelage. The Hub of Prosperity, a 5-acre research and education farm in Edinburg, Texas, aims to recast a food system that promotes population health, economic prosperity, and soil and ecological regeneration.

Led by Program Manager Stephanie Kasper and Agroecology Program Director and associate professor Alexis Racelis, the Hub is a collaboration between the Edinburg First United Methodist Church and the University of Texas Rio Grande Valley. It is located on land previously farmed by a church attendee, growing a corn and sorghum rotation. When the project began in 2016, its leadership wanted to pay homage to the region’s role as an innovator in the citrus industry, while acknowledging the sometimes nefarious social and political context surrounding that economic development. A curbside farm stand gives the neighboring community and university students direct access to the farm’s produce, which includes over 20 varieties of tomatoes. This is local, organically grown, nutrient-dense produce available at a reasonable cost. University stakeholders benefit from the production, disease-tolerance, and cover-crop research data being generated from the living laboratory. The intellectual capital developed in the community through training programs and educational events, in turn, promotes economic prosperity. The Hub trains students for success in the food system, through hands-on research in the field, in government, and in their community. As health-promoting practices regenerate the microbiome in the soil, so too does it regenerate the ecological communities above ground.

The richness of the soil, nevertheless, betrays the farmer’s best intentions. Bermudagrass, what Arizona University calls the “toughest grass,” covets every delectable and masterfully prepared vegetable planting bed (Kopec, 2003). In 2019, the first year of production, the Hub saw devastating crop losses due to bermudagrass encroachment. A question was raised, “do we use Roundup this once?” Kasper admits laughing. But research demonstrating how solarizing fields can suppress weeds prompted the team to consider the practice (Guerena, 2022). Solarizing has allowed Kasper to reduce the number of tillage passes and minimize soil disturbance. This, in turn, promotes the fungal communities that serve as a vector for nutrients and other information. Additionally and crucially, solarization promotes rapid growth through its initial nitrogen boost, giving vegetables a head-start over other weeds. 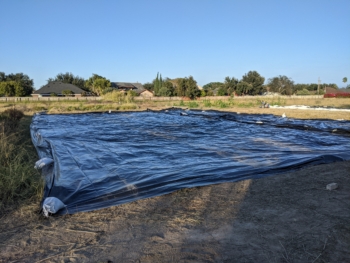 The Hub’s solarization process involves tilling the bed, planting a leguminous cover crop (sunnhemp and cowpea do well in the region) and letting them grow. About halfway through the bloom, Kasper and her team flail mow the cover crop into tiny shreds of organic matter. At times, a local juice bar’s organic waste gets added to the mix, along with mushroom growing blocks enriched with mycelium. The team then lays a massive silage tarp, turning the average August temperature of 105°F to over 140°F. After several months of exposing the soil to high heat and no moisture, the organic matter has thoroughly decomposed and adds a nice tilth to the soil. It dramatically reduces bermudagrass pressure by smothering the existing grass. While the benefits of solarizing are tremendous, Kasper acknowledges the ecological contraindication: it is a large piece of plastic and eventually breaks down in the Texas sun. Her team uses sandbags to hold the tarp down and prevent damaged plastic from polluting the environment, but that also demands additional labor time. Nevertheless, it is labor that is saved from the 15 hours of weeding per bed a week before implementation, and therefore, benefits outweigh the costs.

When thinking about the next steps for the farm, Kasper says biocontrol of bermudgrass may be a research project she would like to conduct in the near future. As a relatively new farmer, she is always eager to learn from other producers and looks to the Regenerator’s Atlas of America to find and connect with others. There, she can find producers growing in similar regions with comparable rainfall across the country. In her fifth season, Kasper reflects on her first years of farming and is reminded that this work takes resilience. The Hub of Prosperity logo, adapted from Magic Valley marketing materials from the 1920s, embodies that persistence, those hopes, and those dreams. All this work takes time, so it is important to celebrate the small wins to keep moving strong, lest we forget the communities who need this work to be done.