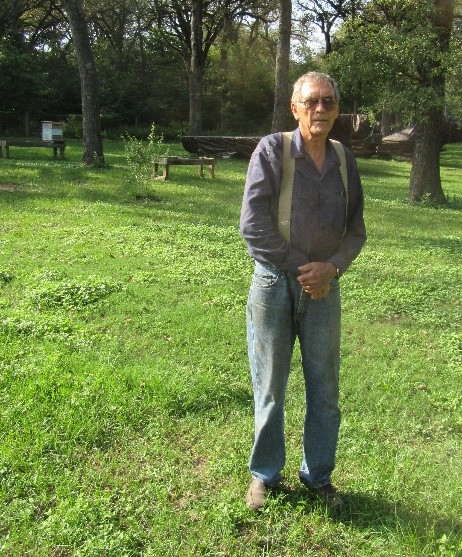 My beekeeping mentor, Cecil Fry, in situ at his Hempstead, Texas farm. Now retired from PVAMU and enjoying his bees and family.

Back in the day, I learned beekeeping at Prairie View A&M University Greenhouse where I started their apiary. Cecil Fry, one of the university’s electricians, started me off and even gave me a hive. With his training as a launch pad, we trained agriculture students and local producers how to be beekeepers. Life is change, and mine was no different, so when I left the university, beekeeping was placed on hold. Recently, I felt drawn back to beekeeping and started up again because some of my clients needed help with their hives. All the old lessons came back to me, so now it’s time to help a new generation of beekeepers.

So, you want to become a beekeeper and you’ve got your hive. Congratulations! Now what? If your hive has grown healthily and you are starting to see some bearding around the entrance, it may be time to make a split.

Beehives, much like plants, can be vegetatively propagated. If you have one hive, you can very easily make another one. In nature, once a colony reaches certain relative point of development where it’s situated, the queen will gather some of her troops and go forth into nature as a swarm. Beekeepers have learned to capitalize on this predisposition towards colony-level reproduction in the form of creating a split.

In nature, a colony swarms, but this is not such a good thing for beekeepers. In fact, it demonstrates poor bee management for a beekeeper to allow a hive to get to the point where it will swarm. Swarming bees fill themselves to the brim with honey before they leave. A hive can swarm more than once in a season, and each time there is a huge loss of resources for the hive. To stave off swarming, simply make a split of the queen cells in the hive. Drawing on a comic strip analogy, Gallant will prevent swarming habit by creating this split, while Goofus will have swarms all over the neighborhood squatting in the void spaces of neighbors’ homes. 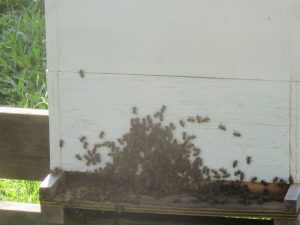 An example of a crowded hive that’s ready to be split. Bearding is the signal to start the process to create two hives from one.

For me, there are two ways of making splits, blind and observed. A blind split is just the normal, everyday split. You already have a hive. The next thing you’ll need is a nuc. I’m assuming here that since you have a hive, you also have all of the necessary safety and beekeeping equipment. You’ll need all of it: bee suit, smoker, hive tool, frame grip, bee brush. I typically take one frame of mostly capped brood and place it in the nuc. I recently became acquainted with plastic nucs. We aren’t friends yet, but I’ll figure it out. Meanwhile, I learned a trick from top-bar hive beekeeping to adapt to the Langstroth hive. Top bars are long and have much more room than a new colony can defend, just like a regular deep hive body has too much room. Top bars have a solution in the form of a divider that fits snugly along the shape of the top bar, keeping out pesky unwanted hive interlopers because the bees only have enough room to work and defend themselves. As the colony grows, the divider can be moved to give the bees more room to work. These dividers are available for Langstroth hives at online retailers.

So you have one frame in the nuc with plenty of nurse bees. The nurse bees will not leave the brood to rejoin the main colony. After a few days, place another frame from the same hive into the nuc. You MUST ensure that this frame has fresh, unhatched eggs. During that interim between the time the first frame was placed in the nuc and the time you place the second frame with the new eggs, the nurse bees will have noticed there is no queen. Once the new eggs enter the nuc, they will choose an egg and start feeding it royal jelly to create a new queen. Once this new queen hatches, voila! A new colony is born! She’ll go on her mating flight and the new hive will soon outgrow its nuc and need to be placed in a hive body.

The other way is to use an observation hive. It’s nice to be able to watch the process and also not disturb the bees too much. I prefer the two-frame, vertically arranged version. Once the new queen emerges, you can transfer the frames over to a nuc or a divided deep hive body. The observation hive will also let you see if there are multiple queen cells being formed. When several new queens are made at once, they will fight amongst themselves for supremacy. There are a couple of options in this scenario: 1) do nothing; or 2) intervene. If you do nothing, the strongest queen wins, in survival-of-the-fittest fashion. If, however, you decide to intervene, you can create another split. Since the split will be formed on the same frame, this will take some finessing and serendipitous timing.

Some caveats: Don’t split weak hives; instead, join them. Don’t make splits in the winter or too late in the summer, depending on where you are and the seasonal nectar flow. If you split during the “summer dearth,” be sure to provide adequate sugar water or other food source. Don’t split diseased hives.

Shortcut method: Instead of making a new queen on your own, you can buy an already mated queen. This procedure is similar in that you’ll still need a nuc, but you’ll use two to three frames of brood, mostly filling the void space. Still, wait a few days after separating the frames from their former colony to give the nurse bees time to realize, “Hey, something’s wrong…where’s the Queen!????!” (translated from beespeak) before introducing the caged queen. The caged queen will have a candy cap that the nurse bees will eat to release their new queen. During the time it takes the workers to eat through the cap, they will grow accustomed to their new queen and accept her as their new overlord. Once the nuc is full and thriving, then transfer it over to a hive body.

Making splits of healthy hives is a good way to build your apiary and, thus, income. It helps reduce the chances of swarming, making you a responsible neighbor. Finally, with the use of an observation hive, it is fun and educational for the next generation of beekeepers to watch the mystery of life unfold before their eyes. Happy beekeeping!

Beekeeping: Considerations for the Ecological Beekeeper